Patrolled is the 138th level in Chip's Challenge Level Pack 2. Patrolled, originally made by Tyrethali Ansrath, is "patrolled" by tanks which switch themselves at specific intervals, which mix up the level significantly and force Chip to make plans ahead of time.

Pick up the two keys through the green lock on the left, then all the way west for one chip, and back towards the start and north through the corridor on the left. This leads to a blue button; hit it twice to keep the tank status quo, then move to the northwest corner and open the yellow lock there. Just slightly to the right, open this blue, then get on top of the tank and switch the keys between blue and red; the tank will move as Chip comes close to it. Finish the northwest, follow to the south and take this chip, then continue downwards until Chip runs into a tank. Duck into the corridor to the right, then sneak south past the changing tank and collect the first chip on the right. Follow the tank and then turn south, and build from this chip across for another three chips, and now touch the blue button and run northwest to another red lock.

The tanks switch as Chip comes out; use the ice to boost to the south, take the next chip, hit the blue button twice, and now collect the two goodies to the right and the one above. The tank now switches; Chip can pass it to the extreme north-east corner and take this chip, and then past the sliding tank to another chip. Slide through the corner to one more, and west to the final chip, using the gravel on top to dodge. The red key here is not required.

Take the three yellow keys behind the socket, then go to the blue button on the right and switch twice, and then turn to the west and exit through the stream of yellow locks. 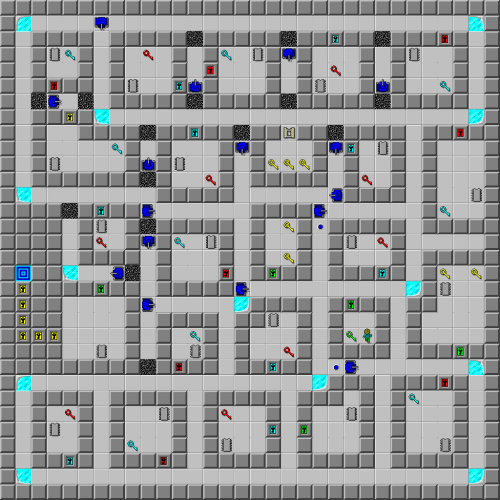