Go Back to Start

Go Back to Start is the 62nd level of Chip's Challenge Level Pack 3. It was created by Mike Lask.

458 route: Pick up both keys and the fire boots then push 5 blocks down column 23, and 3 up column 23 (to reach the chip and upper part of the level), and leave the remaining block in place to push down later. Teleport DUD to collect the green key, and use it to teleport L. Press the green button to release the teeth, and lure it into the bomb and collect the skates. Now teleport R, go down past the exit (guarded by a yellow door) and across the thief, then R and down into the bomb room. Clone a paramecium and move the block R 3D (picking up a red key from under the block). Now wait until the paramecium is L of the block and move the block 5U 9R 8D 3L then wait [2] and move the block L and up to explode the second bomb (the paramecium having exploded the first bomb). Press the blue button once and teleport U, push the last block down column 23, collect the yellow key in the recessed wall maze, teleport back into the bomb room and back across the ice to reach the exit.

Another solution involves collecting the chips and blue key at the start, then using the blocks in the fireball room to get some of the chips here, getting the rest using the skates. Another involves bridging across (18,31) whilst enough paramecia are cloned to explode the bombs by brute force.

In MS, the boss of the paramecium cloner in the southwest room is a trapped fireball facing west. If the fireball is released into the water, the boss (assuming no paramecia were cloned) becomes the unmoving, untrapped tank by the recessed wall maze. As this tank does not attempt to move, cloned paramecia do not step off from the clone machine despite all four directions being open, which can be problematic in some solutions. 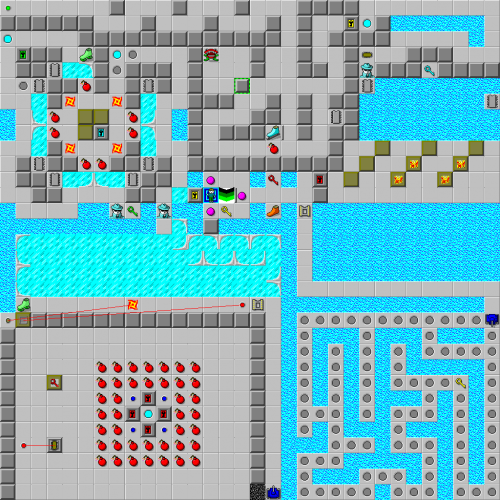