In Chip's Challenge, there are three distinct primary rulesets. Most Chipsters are familiar with the MS ruleset, but the Lynx ruleset has slowly gained popularity over time, partly due to the ease of use of Tile World and the Lynx-compatibility of CCLP3. The Steam-released Chip's Challenge 2 ruleset is virtually identical to the Lynx ruleset, except where otherwise noted on this wiki. The CC2 ruleset also applies to the Steam re-release of Chip's Challenge 1, even if the Microsoft-style tiles are being used. 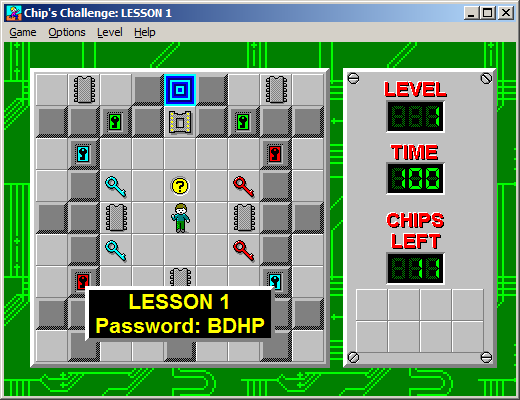 The Microsoft ruleset, commonly referred to as the MS ruleset, is the ruleset used in the 1992 port of the game to the PC, which is the game most players are familiar with. Because of software limitations (it was developed for Windows 3.1), this ruleset lacks animated gameplay, and instead objects jump from square to square. It also appears that too little playtesting was done, and there are numerous rule differences. Due to sloppy programming, many strange glitches exist, such as slide delay and the Controller and Boss Glitch.

As this is the most well-known ruleset, many custom level sets, especially older ones, are usually designed with this ruleset in mind. Chip's Challenge Level Pack 2, for example, is not completely Lynx-compatible - assuming the original set is being used and not its Lynx counterpart released a decade later. In their original states, 48 levels cannot be played and 21 levels are unsolvable while playing in Lynx. This only leaves 80 solvable levels in the whole set, and even of these, four (Ranger Denmark, Traps I, Glider and Fire, and Cloner's Maze) are highly unequal in solution difficulty. One level in particular, Zartacla, is completely busted due to the ability of block slapping in Lynx play. Rarely, levels are designed exclusively with the Lynx ruleset in mind; examples are Scott Feeney's Graue1_LYNX.dat, Joshua Bone's JoshB_LYNX.dat, and even CCLXP2 in some cases.

Screenshot of the Atari Lynx version

The Lynx ruleset is the ruleset that was used in the original 1989 game for the handheld gaming console, the Atari Lynx. These rules were devised and programmed by Chuck Sommerville. All 148 of the original levels in CC1 (excluding Thanks to... from the MS version) were designed with this ruleset in mind, so many of the busts or odd behaviors that occur under the MS ruleset do not occur under the Lynx ruleset. 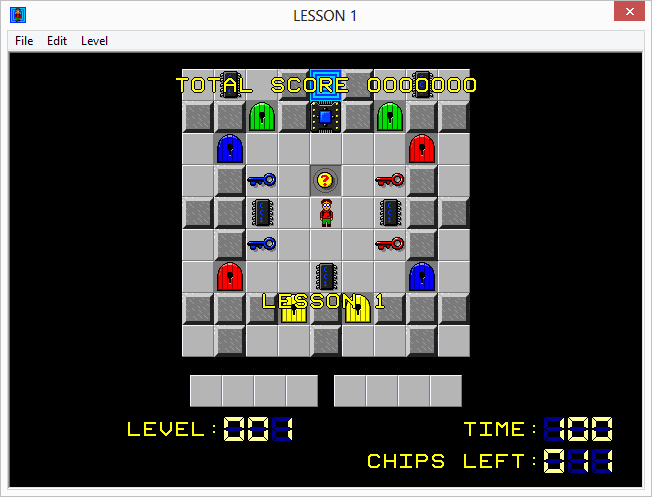 Screenshot of the Steam re-release version
Not to be confused with Steam.

The 2015 Steam release of Chip's Challenge 2 and re-release of Chip's Challenge 1 use the same engine, which is currently only available on Windows machines but mostly based on the original Lynx ruleset. It contains some deviations from Lynx, such as allowing backwards overrides and shortening splash delay, but otherwise inherits its rules from Lynx, and can be assumed to inherit everything except where these deviations are explicitly pointed out.

Differences between the various rulesets[edit]

Except where otherwise specified, the ruleset comparisons here are between the MS ruleset and the Lynx ruleset.