Internal Clock is the 60th level in Chip's Challenge Level Pack 2. Largely, the level is a giant itemswapper, trading boots, keys, and eventually chips, but complicated by the addition of an "internal clock" - a clone machine spitting out fireballs. The quickest route, however, will make the fireballs almost meaningless.

Run immediately right to avoid death and take the yellow key, then open the yellow lock to allow Chip to move the block R. (2R gains [2] that is lost anyway and puts the block further away.) Jump in front of the fireball, take the suction boots, and sneak behind it. Use the force floor exit to dodge the next fireball, and then collect the fire boots in the northeast corner. The force floor will protect Chip from the approaching fireballs; wait [1] for them to hit the force floor, then escape and throw the block 4D 2L 12D, to be used to exit the level later on.

Take the blue key to the bottom, then the green key at the start, and finally use this for the maze with the eight chips. With this done, open the socket above to collect ice skates, then go back to the left and take the red key. Now, Chip is ready to exit; move the block 20R, then open the second red lock and push the block through. Remove the top three sockets, and Chip can then bridge to the exit. 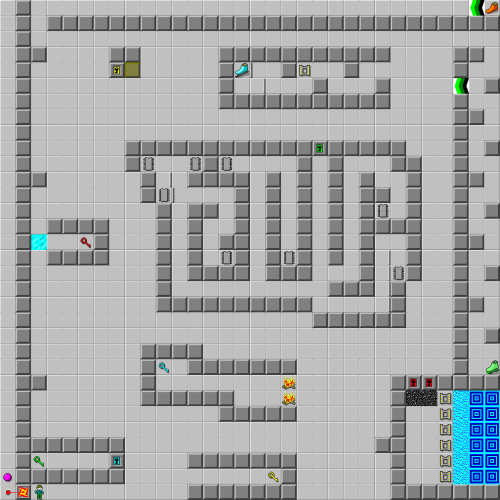