Icy Moat is the 61st level in Chip's Challenge Level Pack 2. While this level is simple in design, being a largely symmetrical ice spiral with six different paths to three chips apiece, the boosting to score 421 is tricky, and 12 unreachable chips may throw off some players.

Circle to the very center and touch the green button, then play south, west, and north for three chips apiece. When Chip returns from the north, touch the button again, then step RU onto the force floor spiral and Chip now has three more new paths to the right. When this is complete, return to the button again and play RU, then U off the south force floor, and circle outwards to the exit.

Stepping backwards off of a force floor is not a legal move in Lynx. CCLXP2 adds extra pathways that allow the player to step off of the force floors at (15, 15) and (16, 16) to the side to allow the level to become compatible. 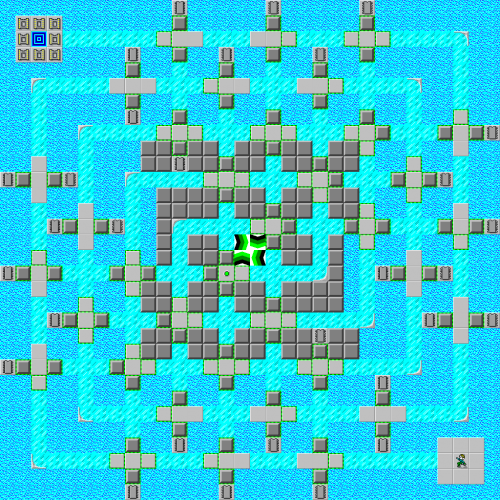