Lot of Danger is the 59th level in Chip's Challenge Level Pack 2. Indeed, there is a lot of danger in this level, and there is, some say, an excessive use of random elements. The random force floor section at the beginning will frustrate anyone, even if it only takes a couple seconds per attempt. To make matters worse, there is also an odd and even step conundrum where the mode can only be guessed at before Chip commits himself to playing for one setting. Odd step is recommended for reasons covered later. The AVI uses even step, since it was recorded before this new development; simply switch the given requirements from odd number of moves down to even.

The fastest route through the beginning section, assuming best luck, is D >L to one chip, R >RD to another, U >L L 2U R to the third, and hold west to escape the area through a blue wall. This is a very unlikely route to succeed, requiring five correct force floor turns out of five with only one error allowed in specific situations; its chance of success is 1/2,096. Follow this sketchy path in general, changing it slightly with UD 2U R from the southeast chip for a slightly slower route if you must. In total, a loss of only [1/2] allows Chip to exit the area onto the force floor strip at 398.8 precisely, and when using odd step, the bold time can be achieved. Otherwise, try to lose an even number of moves at any time.

Take the yellow, red, and blue keys, and then wait [1/2] in front of the green to avoid the Transparency Glitch. Hold the west key all the way over, past the walker (waiting in cases where the current route has the walker in front; the 353 route will allow Chip to slip in just behind) and the superfluous fire boots, and then pick up all the chips. Be careful to touch each square once only, because the chips give way to water and Chip can't swim yet; at the end are flippers, but it's a long swim back to the chip.

Now, Chip must watch out for walkers; use the gravel if possible to get around tough situations, and if there exists any possible way to escape with no time loss, consider it at least. Close to the end of Lot of Danger, Chip must know whether the teeth are in odd or even step to take a quick shortcut that will save either [1] or [2]. The 353 route reaches the flippers at 378.4; if Chip is an odd number of moves down from this in odd step, there is a spare move, so take this into account as well.

Take the two chips above, walk left, and take the chip below, in the corner, then the chip and the blue key. Continue right to one more, then one in the very north, down to two more, then right to the final three. Sprint 10U and then check the clock again for the shortcut. The 353 route reaches this at 361.2, and wait [1] if necessary to be certain that Chip is an even number of moves down.

Walk 13U 5L past the teeth, then collect all the remaining chips except the one near the pink ball - it's pointed in that direction. With all required chips, open the four locks above and exit. The likely reason for the four elements under the locks was to appear as if Chip would have to collect all the boots to exit; however, elements on the lower layer do not take effect when Chip touches the square unless the top layer contains a block. This "mistake" was intentional, according to Rolf himself.

The original assessment of Lot of Danger's upper limit was 352.8; Andrew Bennett, noticing that there were two [1/2] waits in the first section of the 352.8 route (which can be seen at the Public TWS), improved 1/5 on this area's route, which will set a new record at 353 if odd step is used and the walkers behave. To date, all potential 353 runs have been foiled by less-than-perfect walkers. Andrew did capture his second attempt on TWS, which dodged a belligerent walker, for official proof. Needless to say, the difficulty rating for 353 is off the charts, as 352 is already worth a 5 star difficulty rating. 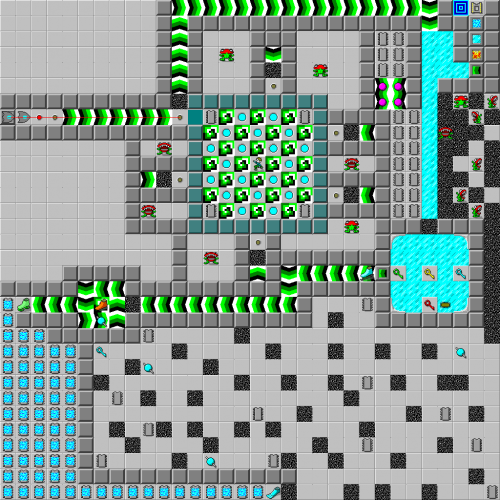