Kablam is the 106th level in Chip's Challenge 1, and is obviously named for the bombs profusely collected in it. As with many recent levels, Kablam is completely symmetrical except for the basic facilities: Chip, exit, and in this case, the pink ball and its puppet, the fireball clone machine.

The fireball clone machine starts by cloning northwards, and will eventually open up two areas with one block and two blocks in them. The most obvious way to knock them to the left is to stuff a block in their path; however, they are still moving right, so a second block is needed. Rather than play to the far north room and then have to work left and all the way back down, move the first block 5L, collect a block from the top room, and put it in place to send the fireballs west, just between the water. Now, use the second block from the top end to back up the first block and then slide the first block all the way left and U, while the second block does its original job. The fireballs now move west and south, which opens up the exit. 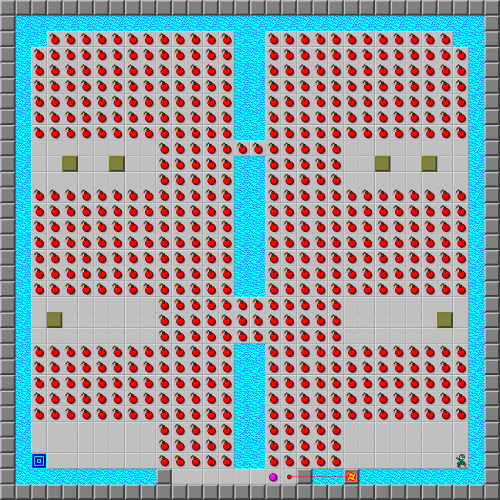