Key Pyramid is the 1st level in Chip's Challenge Level Pack 1, and it is the first of nine lesson levels. This level is primarily centered around emulating what Lesson 1 accomplished in the original Chip's Challenge 1 - teaching the player all about how to use computer chips and keys. Fortunately, much like its CC1 counterpart, it is impossible to cook Key Pyramid; meaning the only way for the player to fail would be to let the time limit run out.

For the fastest solution that beats the level in 32 seconds, there is not much thinking involved - a simple matter of running back and forth to collect more keys that unlock more chips. However, the one thing that may be worth noting is that when Chip collects the green key, he must return to get the red key before going down and collecting the two chips below the green key, such that when returning with the red key, all three chips in the southeast can be collected in one go. See the YouTube video below for a video of this quick solution. 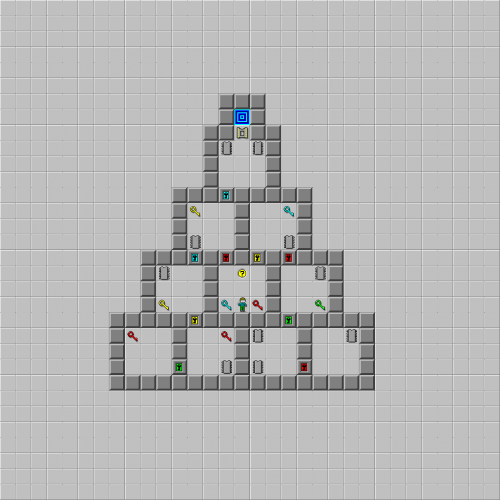 Awareness slowly returned, as a frantic girl's voice cried, "Chip! Where are you?!"

Chip, he thought. Yes, that's my name. But who's that shouting? And where am I?

Groping for his glasses and staggering to his feet, he looked around, quickly spotting the loudspeaker in the ceiling that let in the urgent voice. Would it let him answer? Clearing his unnaturally parched throat, he croaked, "Hello?"

The voice responded instantly, in tones of sharp relief. "There you are! What happened to you?!" the girl demanded.

"No clue," he said, squinting blearily at the sterile tiles and plain gray walls surrounding him. "I was hoping you could tell me. Who are you, anyway?"

There was a startled pause; then she replied in hurt tones, "Are you all right, Chip? Don't you know me - Melinda, your friend and fellow Bit Buster?"

Melinda...the name stirred a strange rush of warm feeling in him. An almost-recognition, vague as a dream. "I...don't know. I'm all right...but everything's hazy. I can't seem to remember anything! What am I even doing here?"

"You volunteered! You're supposed to be testing the Bit Busters' new Clubhouse Challenge, before we turn it loose on the recruits. But we lost contact with you, right after you went inside. And then another emergency came up -"

Then she was back, sounding urgent. "Chip, I'm sorry; I'm needed elsewhere. You're going to have to get through the first few levels on your own, with or without your memory. But you're good at this. I know you can do it!"

Somehow, even in the haze of his non-memory, Chip felt a strange certainty that he could trust this girl - and that he would rather do anything than betray her confidence in him. Shaking the cloudiness from his mind, he stated, "All right. Tell me what to do!"

Warm pride filled her voice as she replied, "Don't worry. We're going to figure out what caused this amnesia, and how to reverse it. But until then, you're going to have to start again at the beginning, and learn all the rules of the Challenge.

"Fortunately, the first ten levels were designed to help recruits do just that. In each of these levels, look for a hint. It will provide you with information on how to get past the challenges in that level and reach the exit square. But be careful! Some things in the clubhouse can be a little...unsafe. Just read the hints and you should be fine.

"Now I really have to go. But I'll catch up with you in a few levels. Good luck, Chip!"

With a crackle of static the speaker shut off. Feeling very alone, Chip turned his attention to the room surrounding him. Two locked doors of differing colors led into the unknown, and there between them lay what must be the promised hint. Gathering his resolve, he went over to read it. His past lay frighteningly shrouded in mystery; but he sensed that answers waited in the Challenge before him. Could he be clever enough and strong enough to solve the puzzles both ahead and behind? There was only one way to find out....