Klausswergner is the 66th level in Chip's Challenge Level Pack 1. The level is a large open space with a 3x3 grid drawn using chips. Each corner of this grid has footwear that allows Chip access to the opposite corner of the level where five more chips are stored. In addition to these there are some keys, two teleports, and four teeth that make the collecting harder. The exit is in the center. The level has an appealing symmetry to it, and the use of all the elements give it some color. The level is delightfully open, so it does not force a strict order of operations.

A simple approach to the solution is to first put on the skates, run down to the fire boots, turn east, enter the lower teleport, run to get the suction boots, and then get the chips behind the fire in the NE corner. Next, head down to get both the flippers and the chips behind the ice in the SE corner. The details of dodging the teeth here come into play, but as a general rule, just run fast and use even step at the start. There is a ring of gravel around the open area, so Chip can always take time and lure the [teeth into a corner and then run away from them. Once Chip has collected all the footwear, he can visit the NW and SW corners at your leisure to get the chips there. Chip can even trap the teeth within the locks if Chip really wants to be careful. 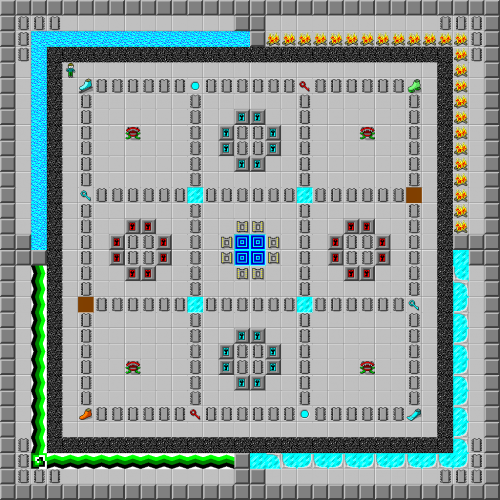