Miss Direction is the 118th level in Chip's Challenge 1. The name is likely a play on the word misdirection.

Play D, all the way up to a green key on the right, and out to the bottom (Note: It is possible that Chip might die in the MS version of CC, due to the Controller and Boss Glitch), and collect the blue key by opening the green lock. Play along the edge of the ice until Chip sees the bouncing ball attacking him from the left, then dodge U and return to the start.

Continue counterclockwise around the fireball loop to get a red key, then touch the button twice when Chip reaches it to get the flippers, as the fireball will switch the green button. Open the red lock on the left side, slide into the teleport, and then play DLU to reach a water space, with the exit U.

Note that in addition to the instance after the green key, the teeth located to the left of the blue walls imprisoning the first ball is affected by the Controller and Boss Glitch. One of the tanks in the room of monsters is the controller to the teeth, and it is stuck in a vertical dimension. Hence, this teeth will never escape. 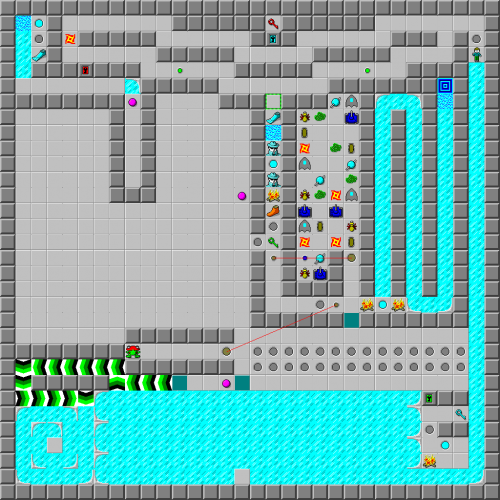