Mixed Nuts is the 125th level in Chip's Challenge 1. Like Firetrap, Mixed Nuts contains many successive puzzles, but they are noticably more difficult. However, there are fewer monsters to deal with, and there is no time limit in Mixed Nuts.

Play the blocks from right to left into the water spaces, then take the chips from left to right, and sneak behind the glider to reach the second section. At this point, Chip will notice a block stairway; to deal with any other situation with blocks stacked diagonally, Chip can use the same method. It's very useful.

Use block 9, knock block 1 U because you have one extra, and then play all blocks D and then all blocks L, which allows Chip to continuously use the lowest block to progressively collect each chip. (Ignore the chips, except of course for chip 3, until Chip can take them on the way back from the water U off them.) With block 2, remove water 1, which allows both chips to be taken. Now, beat the bug to the left, take the first seven chips, and play U 2R U 2R 3U 2L 4U R >2 R 2U 2R to complete the room. In the next room, all 13 blocks have to be moved to take the thirteen chips; the fastest way to do so is 3R 4D to move the center block, followed by RDRURD 3U LDLD 2L U 2D LULD 2U R 2U L 3U to leave the room. The final puzzle is to the right.

In this section, there are six different landings, which lead to different points on two separate force floor tracks that lead to chips. The bottom track is complicated by the addition of two bouncing pink balls guarding the chips. Play off landing 4 and down into the southeast corner. Slide >3 U to enter the bomb maze above and take those chips, then the remaining chip guarded by pink ball 2, the ones from the other bomb maze, and then the chips guarded by pink ball 1. On the way out, collect the four chips above that. With this section complete, collect the chips from landings 6 and 5 before going to landing 3 and taking all the chips except the ones off landing 1 and landing 2. Play to landing 1 and landing 2 separately to finish the chips. Past the socket, play U 3R U to slide to the teleport and boost left towards the exit a few spaces away. 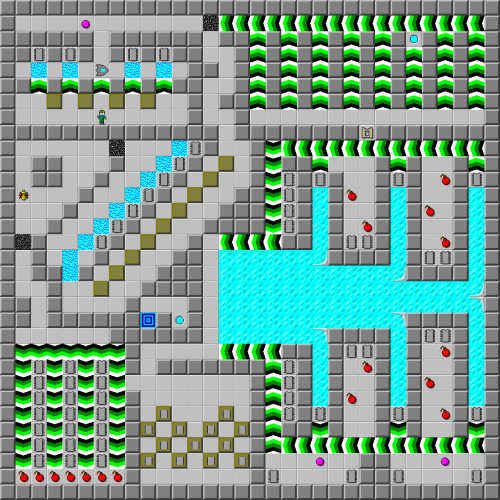