Jump to navigation Jump to search
This article is about the 124th level in CC1. For the 29th level in CCLP2, formerly titled Fire Trap, see Fire and Water.

Firetrap is the 124th level in Chip's Challenge 1. This level is full of successive puzzles that need to be completed in the right order, and are also difficult to figure out. As expected, many of the puzzles will involve redirecting fireballs onto green buttons and blue buttons in order to perform tasks that Chip cannot do himself.

Hold the trap open to release the fireball for another run, then shove the block U 2R and it will proceed to release Chip from the trap. Ignore the chips in the fire maze, but push the green button, then slide on the ice space and take the chip next to it, and then climb the tank ladder to the left to collect a chip and red key.

Emerge back out towards the gravel space and ice slide, then turn south and collect some goodies before taking this path. Now in a fireball room, the goal is to get the fireballs to touch the green button. Use the blue lock to access a block and push it U 4L R 2U 7R to set the mechanism in motion, which allows the red lock in the southwest and another such mechanism to be reached. This room is far easier, as it only needs the block to move LU to be ready, with the tank ladder set in motion.

Go back to the ladder and collect the fire boots on the right edge, then use the ice shortcut on the right to return to the start and pick up the four chips behind the firewall. Since Chip now has fire boots, collect the five chips remaining in the fire maze, then head back to the ice spiral and collect the last chip in the solid walls on the way over. There is also a chip placed within the ice spiral, and then one placed next to the blue button. When this is complete, run across the very south, take the final six chips in the stacked lines of fire and exit the level from the lower right. 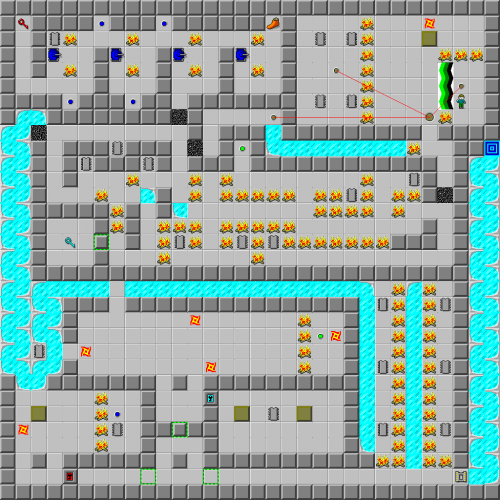