On the Rocks is the 33rd level in Chip's Challenge 1, and the third untimed level. On the Rocks gets a 3 rating simply because it takes so long, although random bridges can be built to solve it. However, the public TWS solution illustrates a very instructive way to beat the level in just over five minutes.

Two distinct sections, east and west, separate On the Rocks into a simple two-stage level. There are four chips in the islands on the west half, one by the beginning clone block, and four in the east half's islands. The easiest and quickest way to both collect the chip by the start and build towards the north section of the west half - the best location to build to the east half from - is to build along the pathway straight to the south and collect the chip, then use the rule of turning bridges to build two bridges, one to remove the water DR off the start and one to fill in three of the four water spaces required to reach the chip down and to the right. Don't worry - we'll come back to finish this bridge later on.

Now, push two blocks onto the ice patch below the start. The second block bounces off the first and can be pushed first to the west, which starts building towards the chip, and then to also bridge eastward to a small island which can then access the remaining two chips here. On your tenth block to the right, however, make a small detour D and take this block to the bridge that was left unfinished earlier to snatch this chip before continuing.

The chip northeast of the start can be obtained using blocks from the cloner to its right. Build across the top to the chip in the far northeast, then push three blocks into a small L formation; one block U off the chip, one block R off the chip, and a third block right on the chip. Use the top block to start a bridge that will go northeast to the exit, and use the right block to start a bridge down to the red button below, then on your way back to the cloner push the middle block U. Repeat this process until you reach L off the red button and then clone and push blocks straight southwards until you are horizontal with the chip in the far southeast, then start building west to reach the final chip. Go back north and use this final block to complete the bridge to the exit in the northeast. 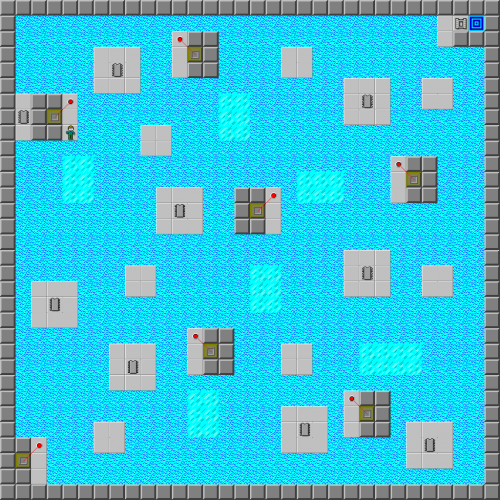