Paranoia is the 96th level in Chip's Challenge 1. The level's name suggests that the player will become distrusting of everything, and downright scared of tanks in particular. Paranoia's hint might add to the frustration: although the fire boots save 17 seconds, they are indeed not required to complete the level.

Instead, Chip must figure out that two blue button presses at the same time lead to no result, which allows Chip to collect both the red key and the fire boots. Once Chip reaches the second row of items, Chip must press the button at the exact time that the tank on the top touches the other button.

This allows Chip to escape the area, slide across the fire, beat the two bugs, then the bouncing pink balls, and then dive into the fire in the next room to collect the four chips (this is one of the big spots with help from the fire boots) In the stack of pink balls, take four chips on the left, then remove the right side and then take the last two chips from below. Now, take the red key to the left of that, use it on the extreme right corridor, then wade through the fire to collect the south, east, north, and then west chip stations. The exit is across the ice space on the left.

This level repeats the password from Four Square in the Microsoft version. If the player types BIFQ into the Go To menu's password field, Four Square is unlocked. To unlock Paranoia, its level number must also be entered in. In the Atari Lynx version, this issue is not present, and Paranoia is unlocked by entering the password WVHY.

Although there are no other levels where this password repetition issue is present, there are three other levels with different passwords in the Microsoft version than in the Atari Lynx version; these are Lesson 6, Brushfire, and Ping Pong. 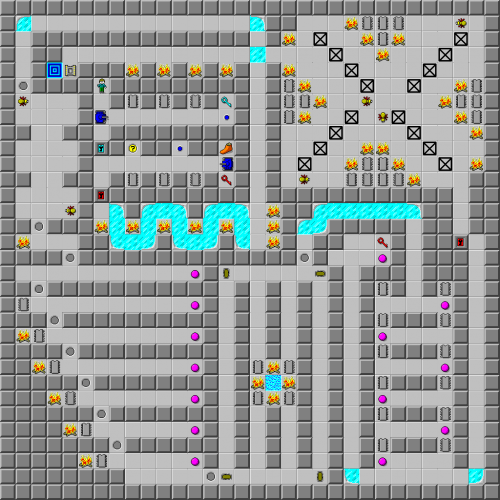