Suspended Animation is the 146th level in Chip's Challenge Level Pack 3. It is one of the Secret levels in CCLP3. It was created by Madhav Shanbhag.

There are 2 distinct solutions to this level.

Initially, all the monsters are on traps unable to move – however, entering the bottom row will cause several of the monsters to be released. Pick up the flippers only, collect the chips in the glider room, then walk round the level anticlockwise to collect the fire boots near the start (collecting other chips along the way). Use the blocks in the paramecium room (which contain chips under them) to build a bridge so that the left green key and the lower-left exit can be accessed without flippers. From the leftmost gravel near the block room, the path goes 4L D 5L 3D to reach the key. The path to the bottom-left exit involves using the final 3 blocks to build a path via the middle-left force floor – however the final block cannot be put in place at the moment due to the glider. Leave this block to the right of the force floor. Now collect the rest of the chips – the column of chips by the teeth will have to be entered from the bottom. Go through the socket and teleports – this will start the monsters moving. Now go through the balls (do not collect any boots), and dodge the monsters to reach the top right. Collect the 2 red keys and walk round the edge of the level (dodging the paramecium) until you reach the block. Push it R, then step up and teleport L repeatedly, removing all the dirt. Now walk back round the edge, open the red door to the right of the block (there is a yellow key under it), complete the bridge, collect the suction boots, and go round to the other red door, and collect the yellow key. Collect the blue key from the bottom of the level, then push blocks 3 and 1 D and block 2 R. Push block 1 through the teleports until it is pushed through the second teleport (counting from the right) again. Push block 2 R through the teleport and follow. Then teleport left – creating a partial post, allowing the remaining block to be pushed into the water. Now collect the skates from the first room and walk round to the paramecium room. Walk along the path to the blue door and collect the green key. Press the green button, and go down the teeth column and across the bottom to exit.

Another solution involves collecting the flippers and suction boots originally, then collecting the fire boots in the ‘animated’ phase. The bridge to the blue door is built by using column 14 (after drowning the fireballs using the yellow key block). With this solution, there are spare blocks which can be used to block off the teeth and paramecium (making the solution easier). 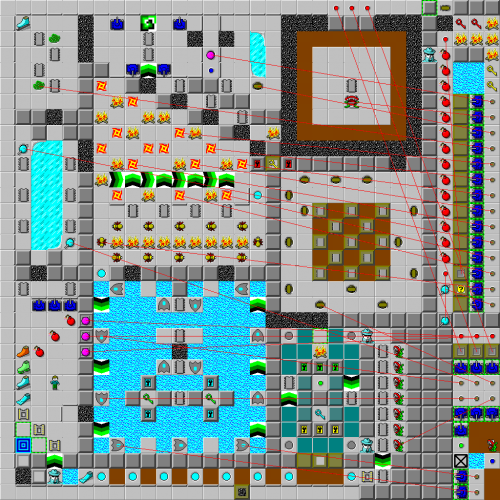