The Parallel Port is the 14th level in Chip's Challenge Level Pack 2. This level is quite notable for being the first time invalid tile combinations are featured in an official level. In the case of The Parallel Port, boots, keys, and the single computer chip are hidden under blue walls, generally in a 60-degree south-southeast formation, which is hinted at by the level name.

Play 3:[R 2D], collecting only the ice skates, then off this space DR 4D UD to collect the chip. Continue D 2R and head upwards in an identical fashion - 4U R 2:[2U R] - collecting a blue key on the way, and then R and all the way down - 8:[2D R]. At this point, Chip must wait for a tank; continue [4] 2R U to reveal a pair of flippers. Keep moving 2U R, in accordance with the tanks, to collect fire boots as well, and pass the recessed wall, then reverse to 2D R to burst through the socket and follow to the exit.

The items buried under blue walls make The Parallel Port unplayable in Lynx rules. In CCLXP2, the items were moved onto the upper layer in the areas surrounding the fake walls they were originally under. The thief at the start was also removed, as it served no purpose. 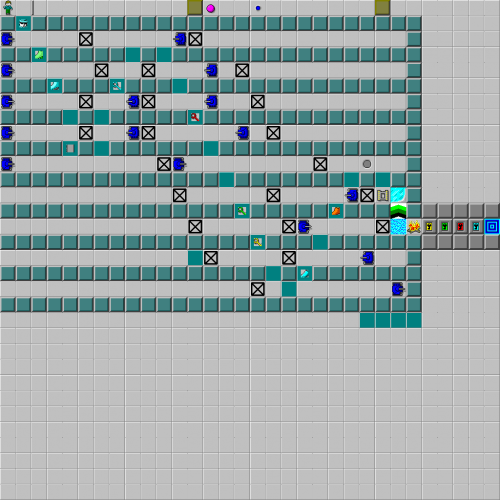