Debug File is the 15th level in Chip's Challenge Level Pack 2. The level is extremely easy; Chip must simply flick six blocks off thin walls to make dirt, and then collect the resulting chips. This is worth 236; however, using the Mouse Panel Glitch for at least three flicks adds one second. The AVI has done exactly three; fewer will still result in a 236 score.

Notably, the exit is hidden under the socket for the first time in CC; Chip needs only to step on the socket to win. This is not allowed in Lynx, and neither are the numerous monsters that start on top of blocks; and even without those, the level isn't solvable in Lynx, because Chip can't flick blocks off of thin walls.

To fix this, in CCLXP2, the monsters that started on top of blocks were shifted one tile up or down. The flippers were replaced with fire boots, and the water at the end replaced with fire; and above the socket, an exit under a block was added.

The only tile that allows for flicking in Lynx is a block on top of a real blue wall, so all the thin walls were replaced with blue walls and the chips under the water were placed to the side. Thin walls were added on the edges of the room so that the player couldn't simply walk around all the blocks. 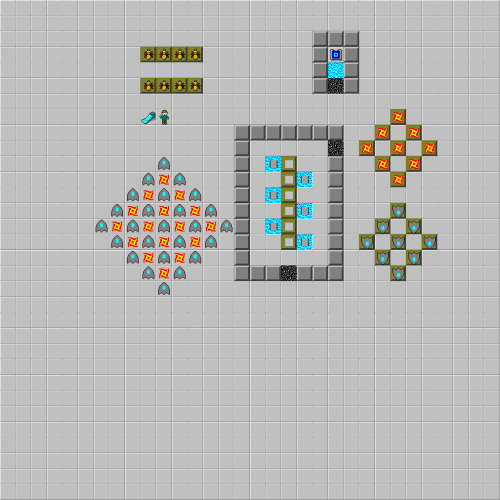