Up the Block is the 83rd level in Chip's Challenge 1. The level is not difficult to complete, aside from a tricky beginning section that raises the rating significantly.

Move the block around as directed, move it all the way to the tile just before the gravel and then one more tile down from there allowing you to catch the first glider, sending it immediately into the bombs. Without hesitation you want to move the block right and catch the next glider before it goes up. From there move the block L for each glider and wait [2] before pushing it for the glider after that, until all gliders are in a line. Stop the block just before the gravel and shove the block D 2L, which will catch all the gliders and send them into the bombs. Follow this with the block in turn to access the southeast area, collect the chips in the room to the far right, and then the chips at the very top of the section.

Now, use the second block in a very similar manner: deflect four of the gliders to the west, which will free the chips and also open a fast shortcut to the south. Instead of using the block to blow up a bomb and then enter, follow the last of the gliders into the middle. Take these chips, and then the ones left behind in the room just outside of the second glider room, and the room to the left that you already passed and then exit in the northwest corner. 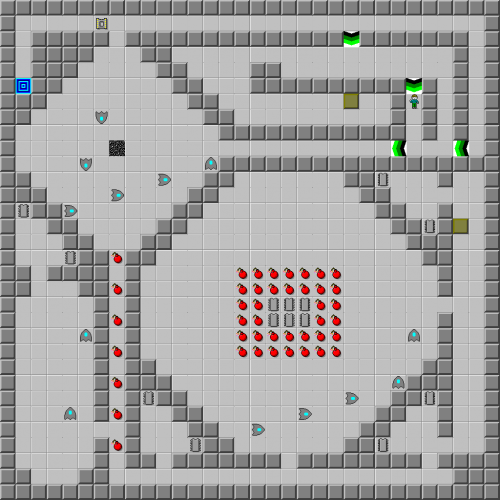