Use the Fish is the 8th level in Chip's Challenge Level Pack 2. While easy to complete if the player takes it slow, Use the Fish is even more boosting intensive than Slightly Mad, and all but one boost must be collected to score the bold - which must be dropped regardless to avoid cross-checking on the 19th block.

Fortunately, all Chip has to do is follow the path. At the clone block, remove the water below it and then move each of the next seven blocks 2D U and east, to create a path to the exit.

The hint tells the player to translate the hidden message from the Standard Galactic Alphabet; this yields a message stating "DOPE FISH LIVES". This was evidently Tyrethali's attempt to get a dopefish cameo character into the game of Chip's Challenge. More information about the dopefish and the message "Use the Fish" can be found here. The dopefish character first appeared in a Commander Keen level titled "Well of Wishes". 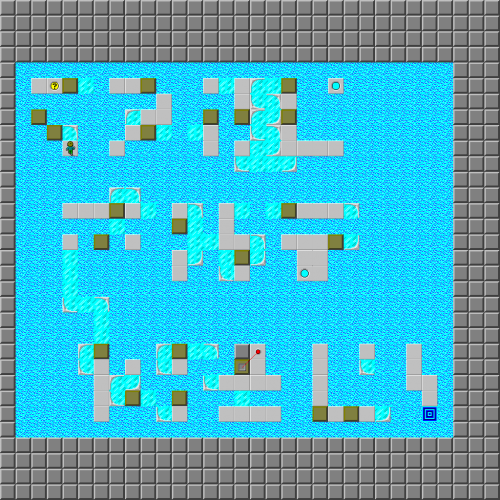