Well of Wishes is the 31st level in Chip's Challenge Level Pack 2. It seems to have been adapted from the Commander Keen level of the same name. As is obvious, this level is full of water, and requires Chip to swim or pile his way through it to collect the 15 chips. Even step is recommended to guarantee Chip's survival when collecting a chip in front of a set of blobs.

Follow the path over two water and dirt spaces, divert temporarily L to open a shortcut while Chip is waiting anyways, then swim to the teleport, collect one chip, then down to the circle of gliders and get in to collect a chip to the left of it. Swim back out, take the chip in the middle, and return to the start. Take these four chips, then swim through the pool 4D 4R U to take a shortcut back to the thief, and turn to the south.

When Chip gets a choice, move (4L [3L] 4D 2L U) to touch the blue button, thus exterminating the tanks, and then build east to a chip and south until Chip reaches another thief. Take the flippers, then move 2U 4:UR to collect a buried chip, and then continue to build down the path past the thief. Chip now requires one more block, which is L from the path, and a green button push.

Return to the blue button, build right and down, and get the block ready by turning right, then continue to build left and run all the way to the left. Complete the block chain above with blocks 2 and 3, which allow Chip to touch the green button. Now, go all the way back to the second thief and build onto the toggle wall below. To finish, move 2R 4U R (2D 2R 2D R) 2R UDR 2U, which allows Chip to take the final chip and exit.

It is worth noting that the melinda time for this level is 366, one second faster than the record of 365. This theoretical improvement comes from the idea that one of the blobs could escape its native area and wander all the way to the green button, assuming Chip has filled in the dirt tile at (3, 21) first. This is extremely unlikely in practice, however, as the blob must make its way to the button rather quickly while also allowing Chip enough time to leave the area himself. 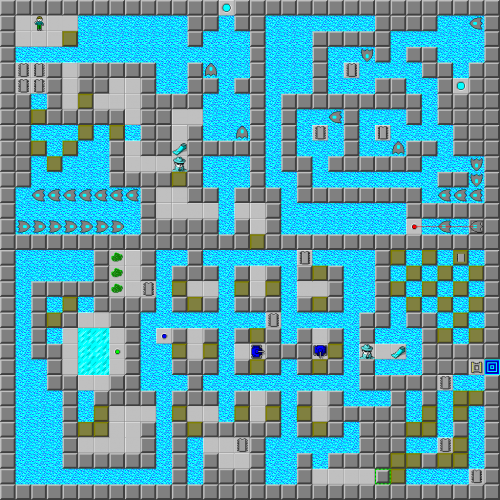