Voodoo tiles are a series of obscure tiles in Chip's Challenge 2 that behave like floor. Discovered by Tyler Sontag, voodoo tiles require hex editing the C2M file in order to be obtained.

After the “PACK” bytes, there will be the bytes 76 40 5C. This sequence is what specifies a north latch gate tile: "76" is the one-byte modifier indicator, "40" is the latch gate north value of the modifier, and "5C" is a generic logic gate. As listed in this article, here are the valid bytes that a logic gate modifier value can have:

In the example above, the 40 byte must be changed to something outside of these ranges, in order to obtain other tiles.

These tiles require values ranging from 44 to FF. Logic gates with modifier values after 43 will act as floor, but graphics for them are still drawn by the game. Take a look at the bottom of the CC2 sprite sheet. 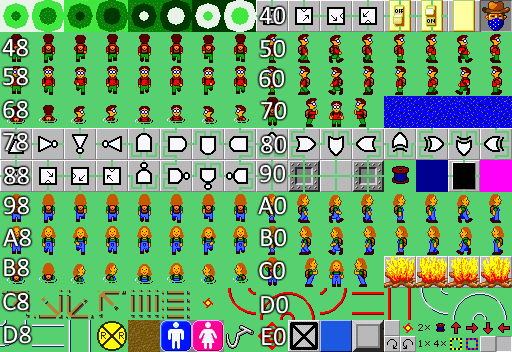 Again, a value of 40 to 43 will draw the latch gates, but going beyond this range will continue through the sprite sheet. For example, the game reading a value of 44 will draw the off switch; 58 is Chip facing north; 74 to 77 are non-animated water; C4 to C7 are non-animated fire; 78 to 8F are non-functional logic gates; DC is non-functional dirt; and DD and DE are non-functional male-only and female-only signs. Any value from 44 to E7 can be chosen and the corresponding 32x32 square will be drawn. E8 and beyond do nothing.

These tiles require values ranging from 18 to 1D. Like the combination tile in MSCC, the screen will fail to draw anything, instead preserving a memory of what used to be visible on the screen there. This can include blurry images of nearby tiles, or the "paused" message. Unlike the combination tile in MSCC, however, these still act as floor, not walls.

These tiles require values ranging from 27 to 3F. These are similar to the other voodoo tiles, except that a rectangle beyond the normal bounds of counter gates is drawn on top of the counter tile base.