Alphabet Soup is the 120th level in Chip's Challenge 1. The level is divided into nine "letters", hence the level's title, each with a puzzle contained within its own 8x8 square. Most are quite hard, which places the rating at 4. Even step is necessary.

Circle around with the fireballs to the blue key, enter the A from the right, then teleport from the south and dive out through the B's blue lock before the teeth can chase Chip. Go through the recessed wall and pick up the red key, then throw the block 3U to direct the glider into the teleport, and slide >LD to skip all the way out to the G. Pick up the items in this room, then slide >[RL [1] LRL] all the way to the D again. The glider will eventually be deflected by the pink balls in the G room to shorten the path through the I; this is a special minor bust which will be found only by careful study.

As the teeth moves into the E, walk UL 2U 6R U 3D L (2D L 2D 2R) to two chips, then 2L to expose the yellow key. After this, teleport to E with a L slide, open the red lock, and take the chip and green key under the block from the south. Continue to the F, take the four chips, and continue 4D [2] R 2U as the teeth escapes the trap, collecting fire boots under the block. With this careful positioning, Chip can step through the trap just before the teeth un-releases it, and then slide >RLR to the I.

From its slide into the teleport here, the redirected glider ran 2L 7D across the brown buttons and then 3R to its death; as a result, Chip is not required to divert to the west and release the tanks. Run through the toggle wall and green lock, take the flippers, and then swim to either yellow lock and walk to the exit.

The completion of this level reveals the next decade message:
If Chip's grades aren't as good as Melinda's, maybe she'll come over to his house and help him study! 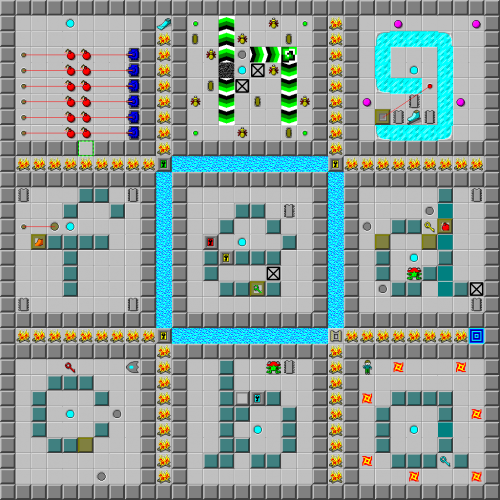