Avalanche is the 147th level in Chip's Challenge Level Pack 3. It is one of the Secret levels in CCLP3. It was created by David Stolp, and was infamous for its devious difficulty long before its inclusion in CCLP3. The main puzzle is comprised of moving blocks from room to room and getting enough of them to the final room to be able to bridge to the exit. The level is comprised of 18 rooms with toggle walls between them. The rooms have single-use clone buttons that toggle the doors and allows access into the next room. Each room is larger than the previous and has a block that can be taken into the next one, so that by the end there are enough blocks to fill 18 water tiles in the last room. The title refers to this increasing number of blocks that are moved about from one room to the next. It is not simple to fit all the blocks in each room along the way, and there is more to the solution(s) than might first be imagined.

In the fifth room, Chip is forced to take the suction boots or else all five blocks will not fit. Luckily these come in handy, as there are many force floors ahead, and some even allow Chip access between rooms without toggling the doors. Likewise, in the sixth room, Chip is forced to take the flippers if he wants to fit all six blocks into that room. After all, one must bring all the blocks along or else they would be stuck in the previous room after the doors close, right? Or is there a way to leave a block behind and retrieve it later somewhere? In the seventh room there is a surprising twist: there is a path into the 17th room. At this point in the level, Chip could keep going clockwise around the rooms in order, or due to this surprising door start exploring and going counterclockwise instead. Apparently there is not much other use for that door, as the only way to move blocks through it is to waste one of them in the water, which in turn could only be done if the flippers could somehow be saved and be used in the final room. In the eleventh room, Chip can get some skates, and in the 14th room a pair of Fire boots. Rooms 16 and 17 both have additional blocks that can only be moved within that room. The final room has a thief that takes away all of the precious footgear before Chip can pick up the necessary Green key. Once Chip fills in enough of the water, he can pick up the chip and head for the exit. 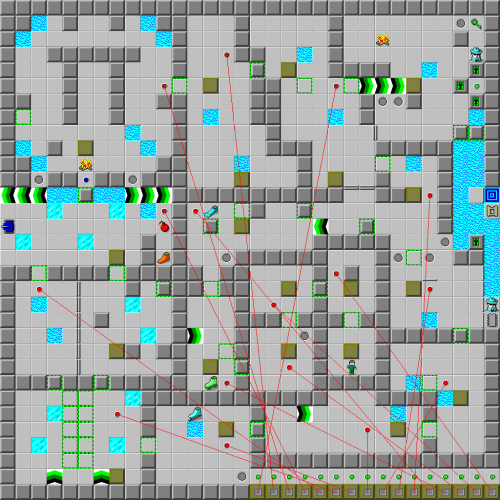