(Redirected from Blue tank)
Jump to navigation Jump to search

A tank, called a blue tank in Chip's Challenge 2 to differentiate it from the yellow tank, is a monster that continues moving in a straight line until it hits an obstacle, reversing when a blue button is pressed. In the Lynx and CC2 rulesets, tanks stopped at an obstacle (such as a block) will continue to move in their facing direction if the path becomes clear.

Tanks in MS move in their facing direction until their path is blocked, at which point they stop and will remain still even if their path becomes clear. The only exception to this is a trap, if a tank is stuck in a trap it will continue to move forward if its path is clear once the trap is opened[1].

When a blue button is pressed all non-sliding tanks rotate 180° (the midpoint 90° turn is purely visual). Any further actions are unrelated to the turning logic and are purely normal monster movement.

One example of this can be seen in this level: 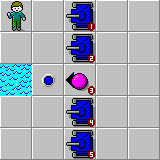 The monster list order (shown in red) dictates that the top 2 tanks move first, then the ball which presses the button causing all tanks to rotate 180°, then finally the bottom 2 tanks. A side effect of this is that when the tanks rotate the top 2 have already moved once this turn and can't move again until the next turn, whereas the bottom two have not moved and as such will start heading in the opposite direction immediately.