Captured is the 132nd level in Chip's Challenge Level Pack 2. This level consists of a stark water island with gliders using teleports to cycle on the top and bottom of the level, cloning themselves to shoot at Chip. The bottom and the top each have a 1-space gap between all the gliders; they also fit perfectly. Captured will thus likely be appealing to arcade-game players; in the original set by Eric Schmidt, this level was named World War III?, in reference to large monster-dodging arcade-type levels named World War I and World War II.

This level was the site of the discovery of the Mouse Panel Glitch; this added four seconds to the existing time. Notably, Chip has to move the mouse to one of two different locations throughout the level, which can throw up difficulties - especially in recording AVIs - as any CC emulation that supports the glitch has a pause screen. Until the 250 AVI, the recording had pauses in it, which is normally frowned upon but proved too difficult to avoid at the time. For an easy way to apply the Mouse Panel Glitch, read the main article on it.

To complete the level, shove block 2 R, block 3 3U, and bridge to the top with block 2 and insert block 1 into the way back around. Now, use block 3 to come around, then stick block 1 into the thin walls and come back around, moving it U and then go to the right. Click *D on this block, and from the spot where Chip moves, continue to follow LDLUL 2U RDRD *D LDL 2U RU *U LULD [1] DRD *U LUL 2D RD *U LUL 2D RD *D and then 5:[LDL 2U RU *D]; instead of repeating this a sixth time, which will force Chip to turn the block repeatedly, move LDL 4U RU *D - with perfect timing up to this point, Chip can slip past the glider underneath. Otherwise, use 6:[LDL 2U RU *D] and take 249.

To finish, walk LUL and shove the block to the water, opening up the exit. Interestingly enough, the exit is under a pair of flippers - one of only eleven exits on the grid's lower layer in CCLP2 - and as flippers are transparent, Chip can see the exit tile. 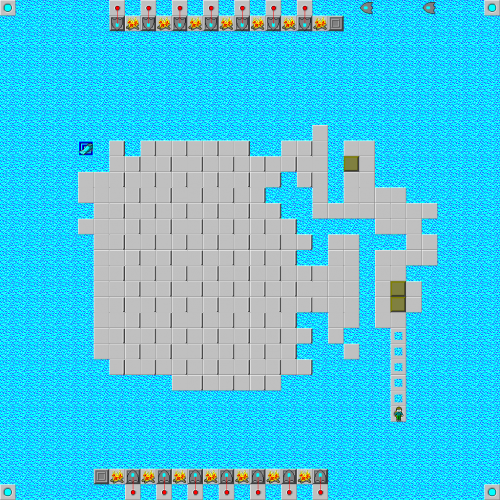