Jump to navigation Jump to search
This article is about the CCLP2 level. For the CC2 item, see Time bomb.

Time Bomb is the 131st level in Chip's Challenge Level Pack 2. Totally Unfair's level slot has strong credibility, and in fact, Time Bomb hung up almost everyone when CCLP2 was first released. Chip needs to clone a glider to remove the time bomb's complement, the red bomb at the start; but given that gliders always turn left, Chip would normally need six blocks to pull it off, and only has four. The secret is to catch the glider with one of the blocks and then to use the short time when it is diverted away from the exit to rearrange the three blocks to redirect the glider up to the fire, and to cause it to turn west and then northeast into the bomb.

Move to the south, knock block 1 north on the way to the three chips, then open the second socket below; the first is needed to redirect the glider north, otherwise it will die in the corner, and the flippers are unneeded. Pick up some items with (2R) 10R, leaving three behind for now. The first stage of the block movement is ULD (2R) LD 4R 3U from the last socket, and now remove the three items, open the locks to free block 2, and move this block a total of U >U U 4R 19D 5R 2U.

Get ready by moving block 3 D, then clone a glider and move the blocks by the clone machine alternately: 3D and 3D, 5L and 7L, and U and 21U. Before Chip can finish pushing this block north, move block 1 3U to deflect the glider onto (0, 0) and only then finish the grand push northwards, which will now send the glider to the bomb. The exit is then available behind the toggle walls; but unfortunately, blobs that control them during the first few seconds of play (until they die in fire; eventually pink balls will clone and switch them instead) may make the correct parity for the 241 bold time require a touch of trial and error.

There are multiple easier solutions that remove the speed requirement; the best is to leave the socket over the meaningless blue button unopened and solve the level otherwise the same, all the way up to after cloning the glider; place the blocks at 2U and UR away from the socket to trap the glider between them, column 0 and the chip room, then watch the glider's movement and start pushing the 2U block when it is headed away from the formation. 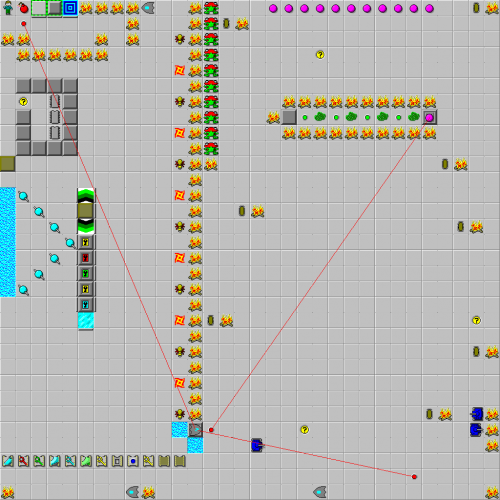