The grid's squares are marked as X/Y coordinates, from [0, 0] to [31, 31] in level editors and in solution guides, commonly to refer to connections of traps or clone machines, or to indicate where a specific object is found at. In Chip's Challenge 2, the X/Y coordinates can go as high as [99, 99].

This is the CC1 grid blank: 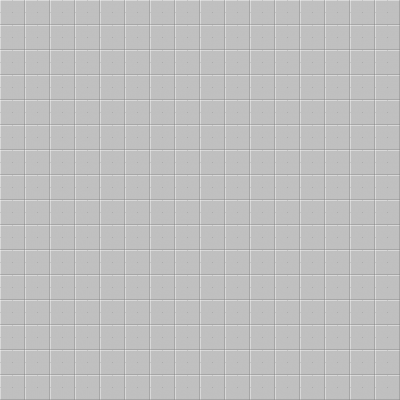 The grid in CC1 has two layers. In MS they are upper and lower; in Lynx they are object and terrain.

The grid in level editors[edit]

To see the entire grid, the editor can be zoomed in and out. ChipEdit and Chip's Workshop use scale; CCEdit, CCLD and CCCreator use zoom. This can also be used to generate maps in any square size. Be warned that ChipEdit's zoom quality is extremely muddy to awful, depending on the scale factor. To make maps in ChipEdit, zoom back to normal size before repasting the grid into Paint or PowerPoint. For maps in Tile World tiles, use CCEdit.

In the original Atari Lynx version of Chip's Challenge, touching the outside boundary of the grid could cause unpredictable results. In the MS ruleset, Tile World's Lynx emulation, and Chip's Challenge 2, the boundaries act as thin walls in their direction instead.

In the MS ruleset, objects on the lower grid will appear or be erased from the level when the square they are under is stepped on, depending on what runs into them; monsters will erase anything on the lower layer of a tile they cross, and Chip and blocks will reveal the tile. Whether the object takes effect on Chip depends on what it is; traps and exits, with an exception in the case of a connected but buried trap, which does not work on first passage, are the only two tiles which immediately have their effect.

In the Lynx ruleset, all tiles consist of a terrain and (optionally) an object. Objects include Chip, blocks and all types of monsters; all other tiles count as terrains. The object, if it is present, is always on top. Any other combination of tiles such as two objects (for example, a monster under a block), two terrains (for example, water under a bomb) or a terrain over an object (for example, a block under dirt) are invalid and render the level unplayable.

The grid on this wiki[edit]

Many pages for monsters and other demonstrational diagrams are treated as small grids with identical numbering systems, and they may or may not be square.