Checkerboard I is the 72nd level in Chip's Challenge Level Pack 2. It is extremely likely that this level would be considered the single hardest level in CCLP2, or at the very least come in second to Cloner's Maze. Checkerboard I is almost impossible without assistance, and while a map is very helpful, it is still finger-breaking work to complete.

The "checkerboard" contains 61 blocks, which will easily not be enough if you attempt the level without a clear plan. If you do use a map, only 58 are required, but the quickest solutions do use all the blocks. Filling in the water located at (13, 3) and (11, 3) will save time, plus choosing which bombs to destroy can make a difference. In total, 29 blocks are needed in the water section, 28 or 29 in the bomb section, two as extras for the water section, and one more block to explode a bomb located in front of the path to the exit.

Chip must watch out for shortcuts through blue walls, Mixed Nuts-style block pushing and other diagonal arrangements, and removing some blue walls in the checkerboard to make other blocks move faster. The full 451 route is shown in the AVI below, and a 452 can be found at the public TWS. A 453 route has also been found, and some of the details about it can be found in the Trivia section below. 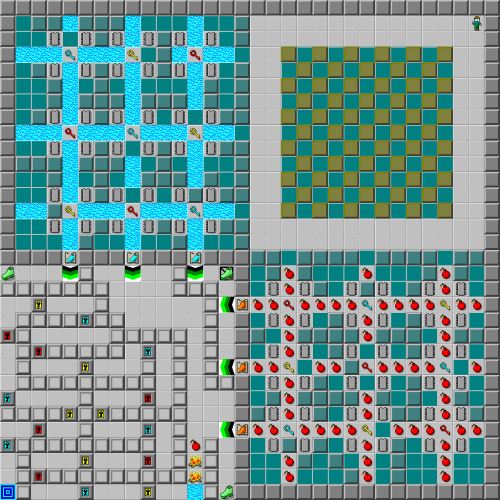