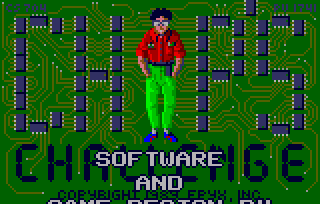 The original version of Chip's Challenge was a launch title developed by Chuck Sommerville on behalf of Epyx, Inc. for the Atari Lynx, a color handheld console from 1989 that ultimately lost out to Nintendo's Game Boy. The game would go on to find success and a cult following when Microsoft ported it to Windows 3.1 and included it in Windows Entertainment Pack 4 and, later, its Best of Windows Entertainment Pack.

The game focuses on Chip, a nerdy high schooler who wishes to prove himself worthy of joining the Bit Busters by making his way through their hazing challenge of 144 (plus 4 secret) puzzling levels.

As presented when starting a new game (and altered from the original uppercase for readability):

Nerdy Chip McCallahan suddenly stops eating lunch. Melinda the Mental Marvel is sitting down next to him!

Melinda smiles. "Chip," she says, "if you finish the challenge, you can join our computer club, the Bit Busters!"

Chip has been a distant admirer of Melinda for a long time. Chip crunches his bag of pretzels and gulps "I'll do it!"

The plot continues every ten levels in the form of decade messages. 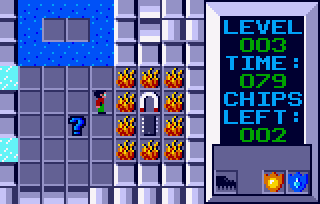 Chip's controls are quite basic: he can only move in the four cardinal directions. The Lynx's A and B buttons do nothing during play; instead, Chip's decisions are about where to push blocks, when to affect the level with button presses, where to lure monsters, and generally the order in which he approaches each level.

As the Atari Lynx was designed to be ambidextrous, Chip's Challenge is as well: pressing Option 2 and Pause at the same time would rotate the screen 180° and invert the controls, allowing the game to be played upside-down, with the control pad on the right instead of the left.

Chip's goal is always to reach the exit, though most levels require first collecting enough computer chips to open the chip socket. A number of hazards block his way, but most of them have some countermeasure. Water is filled by blocks and easily passed with the water shield; ice is no longer a slippery hazard with the cleats; bombs can be detonated by a wayward monster; doors can be opened with the correct key; and so on.

The game is bright, colorful, and animated despite the small screen size. Chip responds to his environment, clearly pushing against obstacles when blocked. Objects move smoothly around the screen. Blocks pushed into water create huge sparkling splashes.

Although the basic concept is fairly simple, the number of different elements make for a large number of potential interactions, leading to a complex and subtle set of rules.

If Chip runs into a hazard or runs out of time, he fails the level, and must start it over from the beginning. The only penalty (other than lost time) is a reduction in score, and if Chip fails a level too many times, Melinda will graciously acknowledge his perseverance and allow him to move on regardless.

Atari Lynx cartridges have no battery-backed memory and predated cheap flash memory, so there is no save file. Instead, levels can be revisited by using passwords given at the beginning of the level. There is no way to jump to a level during play; passwords can only be entered from the title screen.

The game keeps track of your total score so far; however, there's no way to save the score, it's lost upon power failure or returning to the title screen, and the Atari Lynx ran on battery power. As of 2021, no one is known to have ever completed Chip's Challenge 1 in a single setting within the Lynx's best-case 5 hours of battery life, so it's highly unlikely that anyone ever saw their total score over a complete playthrough of the game.

Chip's Challenge has a curious legacy; it remains nostalgic for a number of people, but very few of them ever played the original game. It remains vastly better known by the first Windows port, which altered a number of rules, sometimes radically.

Although sales numbers aren't available, and Chip's Challenge wasn't enough to save Epyx from declaring bankruptcy the same year it was published, the game was popular enough to have been ported to a number of other platforms. Including MS-DOS, the ZX Spectrum, the Commodore 64, and others.

A sequel, Chip's Challenge 2, was completed in the early 00's, but couldn't be released due to licensing issues. It finally saw the light of day in 2015, when it was released on Steam alongside a new port of the original Chip's Challenge.

A player with a keen eye may notice that the level Cypher contains three level passwords. One of them will warp to Cake Walk, the first of four secret levels hidden beyond the usual final level, Fireflies. 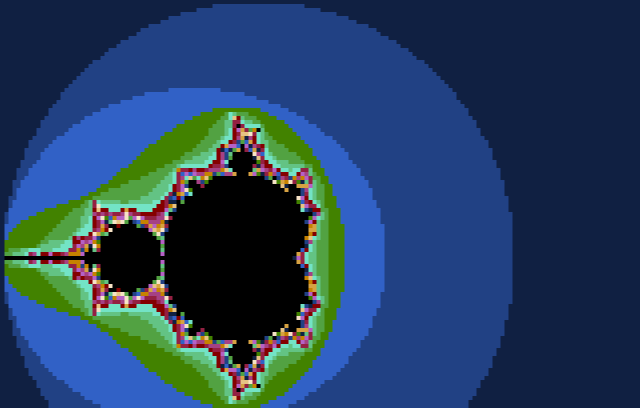 Initial view of the Mandelbrot generator

Entering the secret password MAND will bring up an Easter egg, an interactive rendering of the Mandelbrot set. The control pad and buttons allow for zooming in on selected areas, which will scale up from the current view and then begin refining it. Unfortunately, the Lynx is not well-suited for this task, and it takes an extremely long time (upwards of ten minutes) to fill in the screen even once.

This article is a stub. You can help Chip's Challenge Wiki by expanding it.