Cake Walk is the 146th level in Chip's Challenge 1, and the first secret level found in both MS and Lynx. Despite its name, Cake Walk is anything but a cakewalk. The upper section contains a lot of block pushing; 33 blocks are required to reach the eight chips and red and blue keys placed in the water pool, and the other five chips and a yellow key are available above near bouncing pink balls.

Chip has 33 blocks available on the right and two that are usable near the start. One is highly recommended to stop the fireballs, and since the five chips and yellow key take Chip around to the west side anyways, he can use the one left to the start, allowing one block to be trashed for greater flexibility in block pushing. Originally, it was intended that the blocks to the left be used as well; Chip can, instead, bridge through the center and use the ice to his advantage. Since detailing every move would be impossible in this guide, that will be left to the job of the AVI.

At the beginning, Chip deflects a couple of fireballs towards the bouncing balls, distorting their paths. Since Chip will be using pairs of blocks, those two blocks will have already been close to these positions in a possible route and it takes little extra time to perform this. When Chip starts building west of the start, more skilled players can utilize spring slides to speed up the return to the blocks. An example of this can be found when Chip removes his first water space on the left side; instead of 3R 2U, a faster method is RU 2R U. While difficult, and with perfection necessary for 712, missing this boosting tends not to cause any further losses.

With all chips and keys taken, open the blue and red locks, then move the block on the right R, wait [1] before following to avoid being hit, and push the block and wait [1/2] in front to avoid block echo. The suction boots can then be taken, and the fire boots are accessed the same way. With fire boots, push the next block 2D 14L 7U into the water to collect a second red key. Move to the force floor jumble and open red lock 4 on the south edge, and move the block R, which will send it into that open space to allow Chip to reach the exit.

The bold time for Cake Walk is 717, set by David Stolp, with a newsgroup post on April 1st, 2015 revealing that his 717 is not the heavily random route previously known to reach 717. This pushes the Melinda time further out, presumably to at least 721. The random route gains only at most 4.8 seconds, so perfect randomness would be enough for 721.8 at minimum, assuming 717.0 is bold. To score the random 717, Chip would have to drop the last block 2U R and the random force floors would have to hold the block long enough for Chip to open the red lock and get out of the way safely. As of this writing, there is currently no known player who has ever done this in real time, though it has been proven that a handful of random seeds exist that would make this route doable in theory. 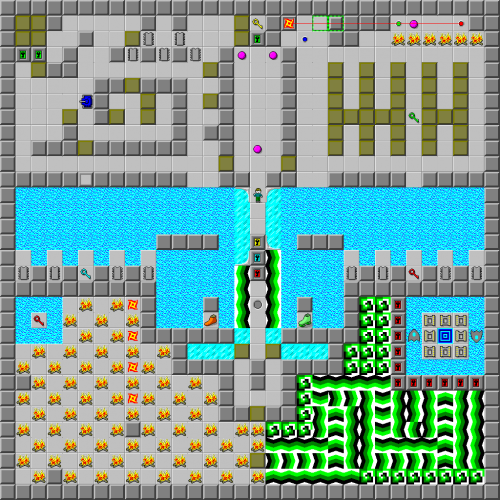