Jump to navigation Jump to search
This article is about the 144th level in Chip's Challenge 1. For CCLP2 level 76, formerly named Fireflies, see Fire Bugs.

Fireflies is the 144th level in Chip's Challenge 1. This appears to be the final level in the set; however, if the player accurately reads Melinda's special dispatches, he/she figures out that more levels exist. Force Field has not been seen yet, and Melinda specifies that it might be encountered, though claims it "officially doesn't exist".

In order to complete the level, Chip has to traverse a circle with eight fireballs on tracks. Chip begins opposite the exit, so he cannot do this in one circle. The fastest way to complete this level is to circle counterclockwise almost to the exit, collecting the chip in the northeast corner on the way (as a fireball blocks Chip temporarily), then turn back and collect the chips clockwise; the safest solution is to immediately move clockwise and circle the level twice, such that Chip's time running against fireballs is minimal.

When Fireflies or Special has been completed, the ending sequence triggers (see Special). To continue to the last five levels, the player must have used the JHEN password from Cypher in and discovered Cake Walk, or stumbled on level 145 by typing TONY into the Go To submenu. Thanks to... can also be reached by using Ignore Passwords, but Cake Walk and beyond is barred except by using its password. As noted above, a player using keen logic can determine that at the very least Force Field lies beyond. 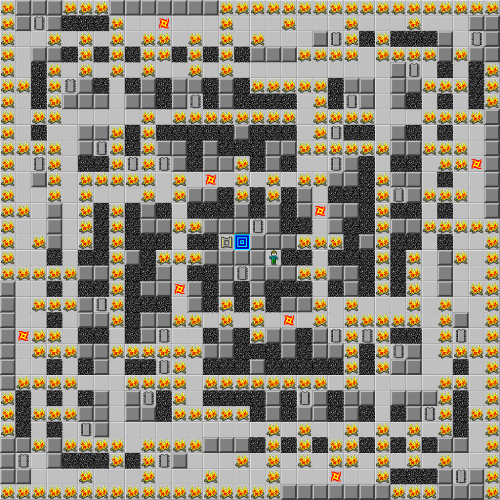