Commit Suicide? is the 132nd level in Chip's Challenge Level Pack 3. Named because collecting enough chips to pass the socket will drop Chip out of a teleport into the wrong part of the level, where all nine monsters reside inside small traps, Ida Roberthson utilizes a level theme that is gaining popularity.

Pass the two pink balls on the top edge, then take the two blue keys in the ice rink - L and U from the center - and then dash southeast to the block pyramid. Walk to 3:DL away from the fire boots and, to avoid the buried chips, move (R 2U 2R U) and take the red key before walking back to the start, again across the upper row of balls, with the fire boots.

Only the two chips in front of the room can be taken safely; walk around the outer edge for the blue key in this room (and ignore the yellow key). Use the three blue keys to enter a brief Sokoban section: push blocks 3 and 4 L, then block 3 2U into one bomb, and blocks 2 and 1 U and block 2 west to reach the green key. Proceed past the two locks, thief and over the Joyride II section on the bottom - dodging DU between the chips, so as to only take one chip from the force floors - and now follow the path to the teleport into the exit. 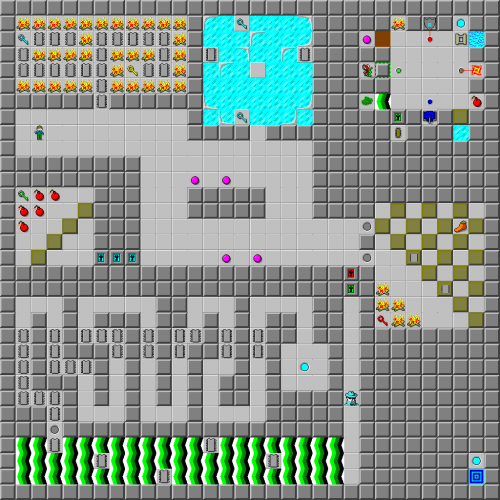