Mental Blocks is the 131st level in Chip's Challenge Level Pack 3. It was created by Madhav Shanbhag. Just like Totally Unfair and Time Bomb (which are in the same slot), it is difficult until you know the solution.

618 route: Initially, all paths lead to water. After 9 steps, a glider will clone a block to the right, allowing Chip to escape. Collect the skates and use 2 of the blocks here to build over to the top left corner. Use 2 blocks to build to the left immediately above the lower tank – do not step on the second. This will cause the glider to hit the blue button, which will set the tanks below on their traps, freeing the chip. While waiting for the glider, use the other two blocks to build towards the fire boots near the lower tanks. After the glider has pressed the button, step on the dirt. Move back to the right and use the cloned block and the next block to be cloned on the left in order to complete the bridge to the fire boots. Collect the chip by the tanks, then grab the chip below from the bugs. In the top right room, push a block over the top clone button, and enter via the bottom to collect the chip. Now push 2 blocks to R U and 2R 2U from the exit (do not step on the latter), so that the glider is deflected onto the right-hand column. Press the first green button and wait by the second button. The glider will hit the first green button – press the second button as soon as it is past the toggle wall on the way out. This will allow Chip to travel below the level of the teeth without the teeth blocking the exit. Remove the dirt and push the other block down to collect the suction boots (push this block into the water). Collect the last chip and the flippers behind the sockets. Now move to the top right and through the blue wall next to the brown button. Move across the top row of recessed walls, then teleport L R L D to collect a red key, then move back along the bottom row of walls. Walk down the right side, through the red door, collect the green key, open the green door as soon as the glider turns L. Walk to the left and collect the blue key, and duck out via the blue wall (just avoiding the glider), and walk to the exit. 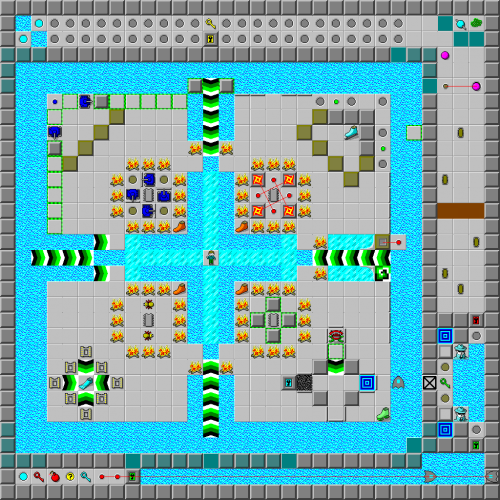