Crypts of Aganorak is the 84th level in Chip's Challenge Level Pack 2. It is unknown what Aganorak signifies; it's likely a nameless location made up by Tyrethali when he designed the level. E-mails to Tyrethali did not ascertain a definitive answer.

Teleport south, move up two rows past the pink balls and take the red key on the left, then slide UD, open the red lock, and bludgeon through the blue wall maze to collect fire boots and some chips in a thin wall maze above that. Now, use the teleport to speed things up by [2] with >LRL D, rather than walking D 2L; this path arrives at (14, 15) [1] quicker and allows Chip to spring slide southwards.

In this cellblocked maze with fire, take the first chip, then move through the grid LUL 3D RURDRUL (the reverse of this also works), and teleport U to use your new blue key. If Chip's on time, he can sneak past the bug, and then collect the circle of four chips and the chips and keys in the middle below. From here, teleport >DR, open the yellow lock, and then collect the 13 chips and flippers, but watch out for walkers. If Chip finds that walkers are coming from the right, take the four to the left first; if it's urgent to get over now, go to the right first. Up to [4] can be spared in this room since the route is a 426.8.

Now, teleport >2L to swim to the final chip, then >RL and past the socket. According to the hint, the exit is under the block on the right side; the other one has fire under it, which would be bad even if Chip still had fire boots because he can't escape the room. 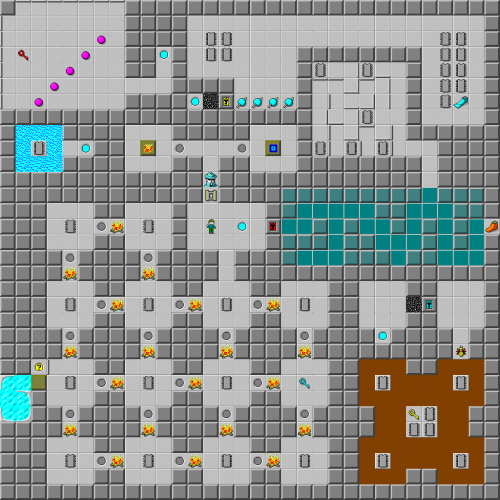