Force Field is the 147th level in Chip's Challenge 1. It is the third of five secret levels in MS, and the second of four in Lynx. The secret levels are hinted at by Melinda in more than just Cypher - in the CHIPS.HLP file, the special dispatches include this:

Dear Chip, This level is so high that it officially doesn't exist, so I can't even tell you its number. But, toward the very end of your journey you might come upon my Force Field laboratory. Slide around and get a feel for how to best get to where you want to go. You'll have to be quick when you transfer from one force field direction to another, but remember there is no time limit. Forcefully, Melinda.

The entire level is a mostly symmetrical (in shape) square of force floors protecting 24 computer chips, veined between walls at every other row and column. Making a map ranges from fairly difficult to almost impossible because Chip rarely stays stationary; the only rest points are the 24 chips and eventually the socket.

As boosting knowledge became stronger and level editors were made, Force Field was eventually solved in only 29 seconds. It is not, however, much easier than just shooting around, because this route is very complex. The west section is the easier one to complete - the east section can only be reached from the far north or the central south. 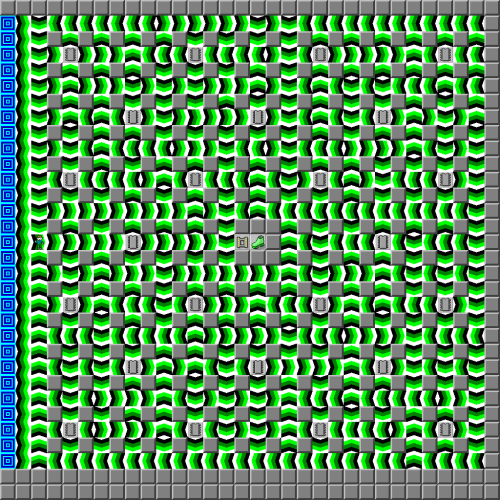