Iron Mysticus is the 137th level in Chip's Challenge Level Pack 2. This Tyrethali Ansrath composition contains four areas of locks with tanks behind them, some of which block Chip and some that don't, and Chip must switch them back and forth. Two of the sections also contain a fireball, which Chip must release to get to some of the chips.

Use the ice at the start to get a head start over the fireball, then teleport west to a green key, and now in the new section, open the two green locks for those goodies and then open the red lock on the bottom end. Switch out the tanks, open the blue on the top, switch, and open the two in front of the teleport. Swap again, finish with the ones left to the right, and then begin the north-west section: teleport from switching, and then teleport U again. Now, open the first red lock, then switch and open the blue and yellow locks, and finally the red one. Switch again and this time, teleport U and L to reach the western section. Immediately move north, switch (this time, the teleports go RLD) and take the two on the far end, and now raid the chips going down to the green button.

Collect the blue key left, and now go back and finish the north-west section, and then go back to the west. Pick up the blue key, switch out, and then take the final two chips. With the RL slide, head back towards the exit and slide UL, and then exit. 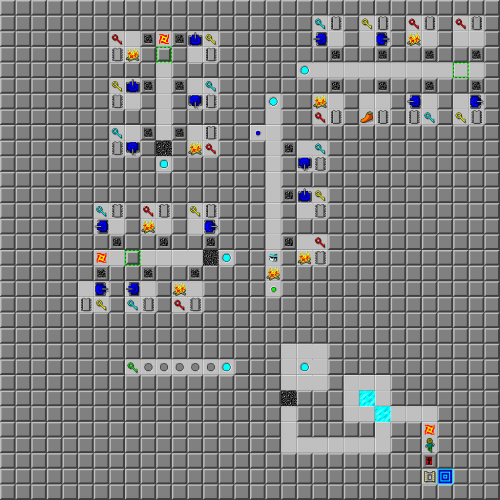