Just a Minute!! is the 49th level in Chip's Challenge Level Pack 2. Upon playing this level, it becomes very apparent that something is fishy; Chip has only three blocks available, and needs four to collect the two chips. However, if the player notices that the teleport made a sound even though it appears that he simply slid over the only teleport in the level, he will eventually figure out the deception: the level is composed of two identical compartments, with no way to tell due to the distance between them.

If Chip were to slide DU at any time, he would simply return to the same room. The way to get to the other room is to first collect one chip by digging into the square from the right and using the top two blocks, and then move the third block into the teleport. This causes Chip to slide over the teleport to the bottom, but then to slide north because this way is open into a completely identical section.

Now, Chip is still in the same three-block pickle as before, but he only needs to collect one chip in the first place. Take the second chip in the same way as the first, and then play into the exit above. 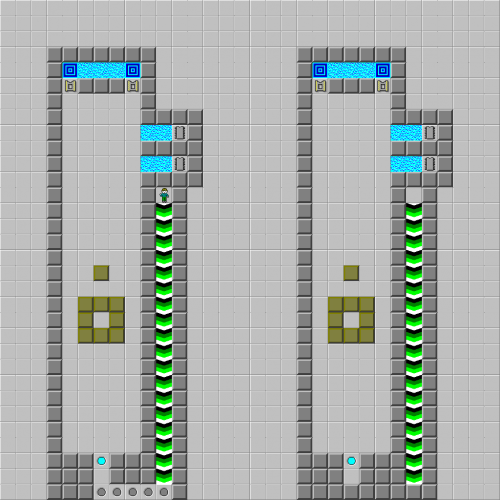