Loop is the 98th level in Chip's Challenge Level Pack 2. This level is a relatively easy solve for Chip; however, the random force floors make the bold time quite tough.

All Chip has to do is follow the paths; take the flippers and fire boots, then the red key and destroy the teeth with the fire, and then the ice skates and switch the red key to blue and then to yellow. Now, steal the 20 chips, move through the pool and open the yellow lock and follow the path to the force floors. If Chip is any later than the shown time of 70 to the toggle wall, the bold is out of reach.

Take the keys from the gliders and swap the red for yellow and then to blue, and then leave the toggle wall closed before opening the blue lock. Follow to the green button and take the fire boots, then pass the socket and reveal the hidden exit under the floor within the fire, at space (7, 24).

There are five invalid tiles in Loop: the exit, an unseen random force floor under the green button and the gravel under the two keys, plus a third gravel tile buried under another gravel tile at (23, 12). In CCLXP2, the hidden tiles were removed and the exit was moved underneath a block, and another block was added at (6, 27) with nothing under it. The right column of fire tiles guarding the red key at the start were also replaced with water, as teeth do not die in fire under Lynx rules. 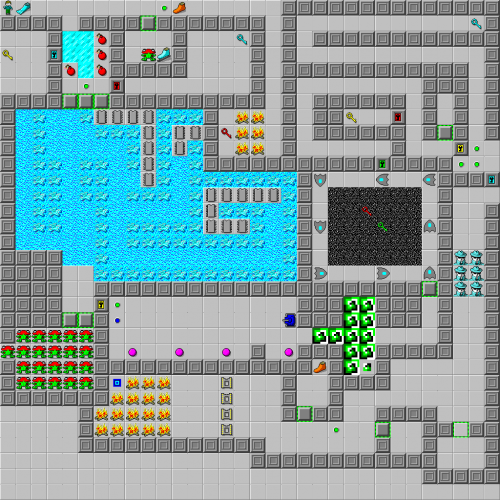