Mix Up is the 132nd level in Chip's Challenge 1. There are a lot of sections, each quite long, and each with its respectively tough puzzle; fortunately, no split-second timing is required except at the very end, which minimizes the clutter in this guide because an AVI will provide sufficient for almost all of the level. One entire section is unnecessary because of the backwards-moving boosting property in the Windows versions. Play this level in odd step.

Move to the far west and pass its multirow wedge to collect the red key, use it on the red lock near the start, and push the blocks around as directed to collect the green key. Now, pass the exit and walk to the parallel bridges. With the seven blocks given to the left of him, Chip will first move one block into the left bridge, then a second block into position and a third next to it, and thus use both blocks at once. Chip will also move the blocks in the southeast in order to create a shortcut back to the right area of this room. When the left bridge is complete, leave the other one unfinished and slide across the ice strip to the extreme right of the level. Step over the force floor and play 3D L 3D 3L, then collect the chips by the cloning walkers by staying to the right and then working up across the left. Now, take the blue key and return to the lower left.

Open the blue lock by the teeth, sneak the blue key away, and use it to unlock the blocks. To use the five blocks, play LU 2D 3R ULULU 4L ULD, drop block 3 on top of this, and then use block 1 and replace it with block 3. Continue this with the other blocks; move block 2 R to use block 4, move block 5 L following the Block Donut Rule to minimize time spent collecting the block later, and now use blocks 2 and 5. You now need one more block to reach the chip; from the other blue lock, play 3U R (RU) 2R D [1] 2L UL to use the block, and then wait [1] after collecting the chip to allow Chip to escape the teeth that was guarding the block.

Now, Chip can return to the parallel bridge to finish the level; beyond the green lock is a set of four recessed walls and four paths to four chips. Grab these, then head north and sneak into the exit, but watch out for bugs. 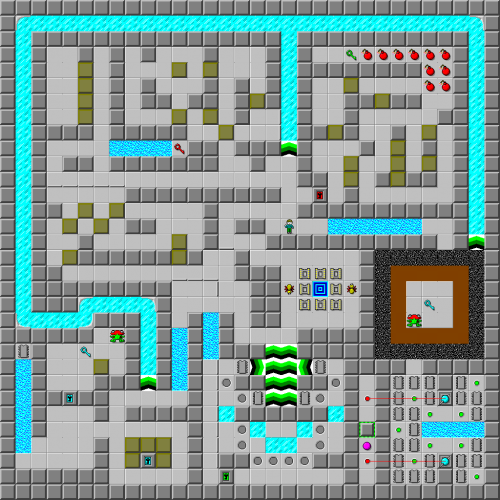