Naomi's Bug Collection is the 2nd level in Chip's Challenge Level Pack 2. The Naomi mentioned in the title is likely to be a relation of Paul Hobden, the level's designer; this is unconfirmed.

Naomi's Bug Collection is a symmetrical level, with fire and water on two sides of the level, and gliders bouncing around the lower area. Despite the name, only two bugs are in it.

In order to complete it, push the block U, take the chip, and jam the block 3L to distort the bug slightly, then open the locks in order of blue, yellow below the fire boots, red, yellow blocking the flippers, red blocking the green key, and then the green lock in front of the exit. Take the lower, shorter path of chips first in order to reduce backtracking.

Another trick used in Naomi's Bug Collection valuable to later play is to leave chips behind on paths that Chip must take later, which is done after the yellow lock is opened. After the flippers are taken, the four chips on the path back can be taken either to or from the water. 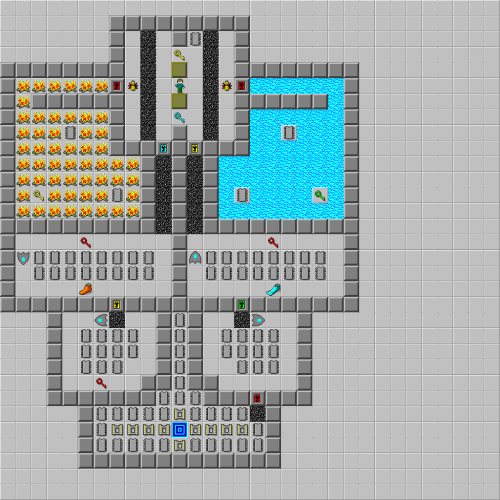