Nightmare is the 70th level in Chip's Challenge 1. This level is really a simple bunch of obstacles on the path to the exit; the only difficult piece is the ice rink with the bouncing blocks.

What this level is famous for is the repeated occurrence of the Controller and Boss Glitch. A demonstration of the five failed traps is shown in the provided walkthrough. Additionally, this level is also notable because it was slightly edited in the Steam re-release of Chip's Challenge to accommodate for ruleset differences; this will be covered later on.

To complete the level, just follow the path up to the tank, punch the blue button twice to allow passage through, and then push the first three blocks out of the way and the other two L into the water as Chip passes them by. This allows him to step on the dirt on the way up to the exit when he returns. When Chip releases the pink ball, it clones a fireball which forces Chip to hide briefly, but in MS and Lynx, the Concussion Rule will stop fireballs from keeping Chip back forever. In the Steam version, however, the Concussion Rule does not exist, and as such the level is modified so that the pink ball drowns after cloning only one fireball.

When Chip reaches the red key, wait for the bug to bounce off the dirt, and then take the key. Walk down past the final broken trap, step over the dirt, through the red lock, and exit.

Upon the completion of Nightmare, the next decade message is revealed:
Chip is halfway through the world's hardest puzzle. If he succeeds, maybe the kids will stop calling him computer breath! 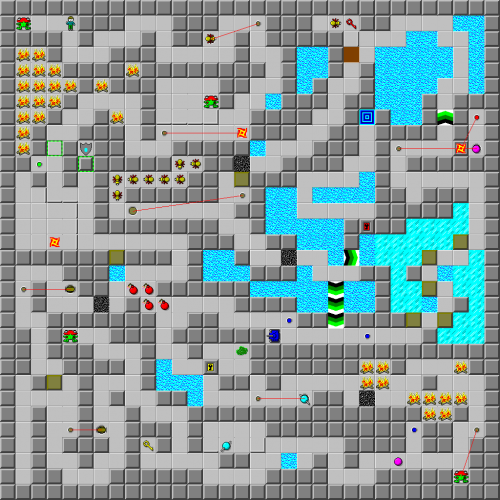