The One Sensible Chip

The One Sensible Chip is the 67th level in Chip's Challenge Level Pack 2. Belligerent teeth and some guessing puzzles come together to make a level that can require multiple attempts. Odd step is required for the bold time.

Move block 5 U 3L U and bridge north with blocks 6, 7 and 1: hold to the very top, move block 1 2R, then use block 6 and then 1, and now nudge block 2 to reach block 7. Delete the blue wall, carry block 10 over the bridge and stuff it into the southeast corner, which at this specific time causes the two fireballs to turn into the path and explode the two bombs at the end of it. An easier solution is to move the block 4U 2R off the gravel, as an error here causes a cook.

Past the bombs are two green buttons; touch them a total of three times, then block off the glider with the tank and move east through the maze to collect a blue key, and then to a selection of teeth ready to pounce. Odd step and this specific time will allow Chip only just safe passage; the teeth can instead be left inside their cages, but the green button inside the room that releases the fire boots will take [16] to hit.

Pass the gravel below and open the blue lock to collect suction boots, which reveals the bomb on ice slide 1 and the open path on slide 2; now that Chip has the suction boots, it's safe to collect the chip. Return towards the teeth room and carefully count the moves to escape: when Chip is 6R along the final path, D 3L from the gravel, wait [1] to change the teeth polarity and escape. When Chip is walking opposite teeth while trying to sneak behind them, it is more challenging to read their positions and stop at the correct spot; it may be simpler to think of the final moves as 5L, then 6L 2U 6R [1] 3R, rather than 11L 2U 6R [1] 3R.

Run away from the teeth, traverse the maze, glider, ice slide, and open the sockets at the start to collect the yellow key required to exit the level. 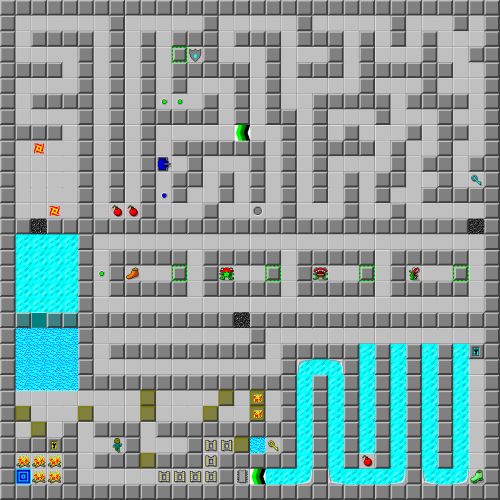