Torch is the 100th level in Chip's Challenge Level Pack 2. The only thing Chip has to do is walk the path to take the chips and then return to the fire boots to reach the exit, making Torch one of the easiest levels in the set. However, he can speed things up by a second by waiting four moves at some point after collecting chip 6 and before collecting chip 13; this will save more time than it loses.

Torch's bold time is faster in Lynx than in MS due to differences in how movement is programmed. Chip is only vulnerable on the tick that he actually picks up a chip, not when he is mid-move walking onto a chip. Similarly, objects can only attempt to move to a new space when not mid-move. Consequently, the time window for a fireball to kill Chip while he is grabbing a chip is only 1 tick.

This means Chip only has to wait at most 1 tick before he can safely collect a chip. If he does wait, he will be "out of sync" with the fireballs and will not have to wait on any later chip. This is first demonstrated if R [1/4] RU are the first moves, which are the ones that begin the Lynx bold route. In MS, Chip would not survive such an encounter even if he is using a spring step. 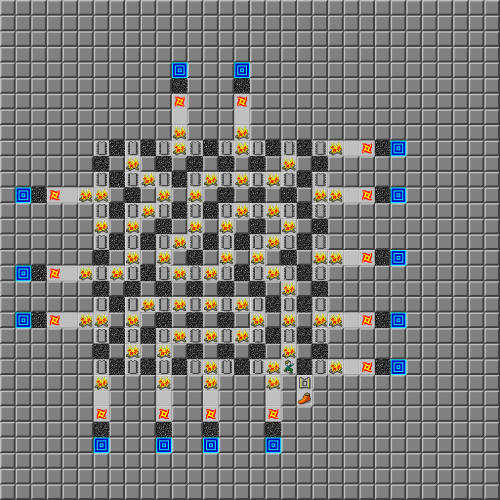