Water Trap is the 125th level in Chip's Challenge Level Pack 3. It was created by J.B. Lewis.

628 route: The aim is to cross all 5 traps on the right to reach the flippers. The items along the way will each allow one more brown button to be reached. Start by moving up and pushing the lower 2 blocks across the water. Walk through the gliders, move the block 2L, collect the suction boots, move the block 3R, and push it R after the first glider is turned round, then R again after the second glider is turned round and has then been deflected again. All 3 gliders should now be deflected into the bombs. Now push this block into the water, and push the next block D allowing the pink ball to toggle the green button. Go through the green walls near the suction boots and push the block up onto button 1. Move the other block back U (trapping the ball), and go over trap 1 to collect a yellow key. Use it to free the block to explode the bomb next to button 2, and hold down this button using the block by the ball. Collect the fire boots behind trap 2. Collect the chip towards the bottom and press the blue button. Go round the gravel and push the block 2U. Collect 4 chips from the ice to the left (using the recessed wall before collecting any chips so as to avoid moving against the direction of the gliders). Push the block nearest the red button (which must never be pressed otherwise a fireball will be cloned, blocking the trap column) 7R, push the lower block R, then the former block 2U (waiting for the ball to move to the right) 2L, and up into the water. Use the block near the fire to deflect a fireball into the bomb guarding the red key, collect the key, bring the block back out, open the red door and explode the bomb. Move the block currently on button 2 to UL from button 3, cover button 2 with the block immediately above it, move the block nearest the blue door U, then move the block nearest button 3 onto said button. Collect the blue key behind trap 3. Go via button 2 (moving the block L) to reach the blue door, collect both red keys, lure the teeth into the bomb, and move the left block onto button 4. Move the block back onto button 2 (push it L first), and collect the green key behind trap 4. Go back to button 4’s area, and push the remaining block into the first water tile behind the green door. Open the green door nearest button 5, then go down via button 2 to the ‘coast’. Collect 2 chips from the left-middle ice patch, unlock both green doors, and collect the remaining chips from the ice (there should now be 1 chip left). Push the block 3R, then go back to the block next to the opened green doors. Use this block (under which is the final chip) to explode the bomb above button 3. Open the red door, then the socket (causing the pink ball to explode the bomb). Move the block currently on button 1 through the bug area, and use this and the other block to fill in the remaining water spaces guarding button 5. Go back out and use the 2 remaining blocks to hold open buttons 1 and 5. Now hold down button 2, and the flippers can be collected. The exit is in the top left corner. 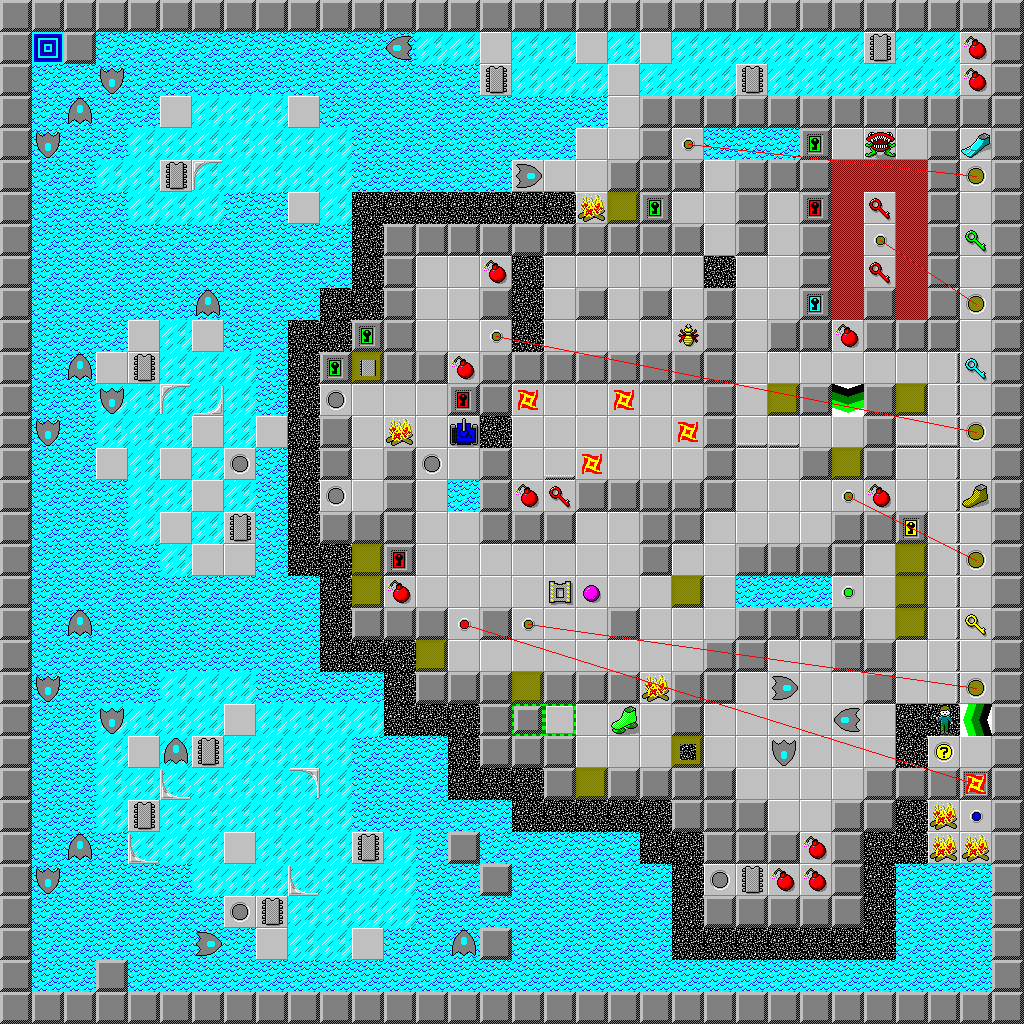