Yike-o-Matic is the 39th level in Chip's Challenge Level Pack 2.

Even step is preferred, though it will rarely make a difference. To get through the teeth, move L 3U 2L, collect the next chip, wait [1] and take the next one, then take either of two identically timed routes. Either move onto the far right column to burn up all the teeth here and take the chips, escaping by 5U 4L; or take the chip on the far south edge and move R 2U L, which will also destroy the teeth with the exception of one which Chip can outrun. Both routes take two moves longer than if there were no teeth.

Escape this area, pass the booby-trapped exit, and onto the random force floors to collect another chip. Although there is a very small chance that these will delay Chip long enough to stop this bold route, it is exceedingly unlikely; using the quickest route through the teeth area and even step will reduce this chance even further. Move to the far right of the bouncing pink balls and run south after they touch the right wall, then onto the gravel and step 3U to reach a block. Move this block onto the ice, then touch the green button and take the flippers, and hit the button two more times before moving the block over the gravel and out.

As noted in the hint in the very southeast, Chip must direct the "Sphere-y-Hot" fireball to repeatedly touch the green buttons, allowing Chip to trudge through the changing walls to the right. Play the block 4D L, which will barely intercept him and send him east. This begins one cycle; however, Chip has to keep him moving. Therefore (since Chip has flippers) move the block 2R D 7L U, then move east across an odd number of green buttons, through the water to the final chip, and then into the corner. Now, get into the toggle wall sequence and slowly crawl to the exit. About halfway there, the walls will stop temporarily as the next button is not hit for another [14], but take no alarm.

In CCLXP2, the fire and fire boots at the beginning were changed to water and flippers, as monsters do not die in fire under Lynx rules. 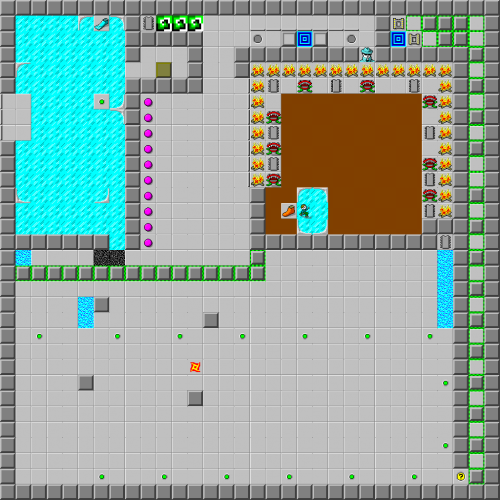