Move the six blocks in the start down over three water spaces, then build one D and one L without touching the two dirt spaces, and take the last block down and around to the sixth water. The fourth dirt buries a thin wall to the north, which will trap Chip if the lower water is not removed first, and prevents him from continuing the bridge down. Therefore, he must collect the seventh block to the left, stick it in, and then finish the bridge. Chip can now take the flippers.

In this area, Chip must untangle the blocks and then build around the puddle to reach the bottom of the river. Move each block out of the way, then remove one water square and knock the lower block L and then approach it from the right side, which will push down another block in the process. Chip now has two water squares removed; he no longer needs to build down because he has flippers; therefore, skip to the very bottom, then build three more water spaces down, and finish with the bomb. Now, Chip can take the three chips.

The next section is a simple progressive wedge: knock blocks 1 and 4 out, which moves block 2 out to form the next wedge. In the third section, a force floor is under block 1; when Chip moves block 2 U, it will kill him if he tries to move RU immediately. The way to avoid this, which escapes many lesser players and leaves them baffled incessantly, is to use a ram by moving -U, which fixes the block in place. (Clicking *U and utilizing the Mouse Panel Glitch is also usable for this purpose, and will add one move but not more points.)

Now, Chip can move block 1 out for upcoming use with 2U 3L. Teleport south and remove the socket to the west first, then use the block, go back around to the west and use the rammed block to reach the force floors. Next comes a long stretch of force floors which Chip is fortunately not required to move around on; for a faster but riskier solution, however, slide and move L >[L 3U R] R 2U >[L 5U R] R to get around to the very east side. Knock blocks 3 and 4 D, then move LU and pull this block west, east and into the teleport. Negotiate the force floors again and bridge to the bottom, which will connect with the other block to take Chip to the exit area. Off the thief, Chip should move R 5D to uncover it. 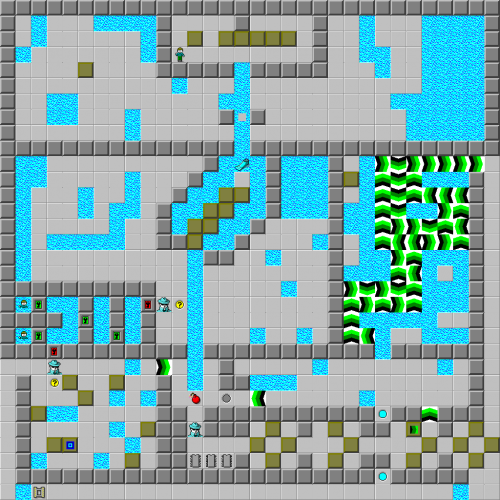