Monster Factory is the 111th level in Chip's Challenge Level Pack 2. Monster Factory requires some pieces of quick timing and a sense of trickery, but not much else. Odd step is recommended.

Stop the tank above by touching the lower blue button when the tank is on the other one, thus stopping the cloned pink balls. Take the yellow key, sneak into the teeth room and take the red key, then use it to collect some more goodies. Open the toggle wall and lure the teeth onto the brown button, then immediately step back D to avoid the cloning fireballs, and then move back U when they stop. Swim through one water and turn south, take all the chips, then follow the path with gliders in pursuit and remove the chip and then fire boots. Note that the lead glider will burn in the fire, allowing Chip to continue. Dive between the gliders, over the fire and take the teleport to the large teeth room.

Start by taking the chip above, then the two on the west edge, and run all the way to the right and turn north for two chips in the corner. As the teeth close in, move 5D and run all the way through them, which will leave them behind for good. Take three chips west, the chips above, and the remaining chips as you move northwest. Chip must now restart the tank's movement after passing the socket, blocking out the exit; hit the blue button a second time to stop it again, which allows Chip to proceed to the exit.

On the path towards the force floors and teleport, Chip depends on a glider running into fire to safely collect both items; however, under Lynx rules, monsters do not burn in fire. For CCLXP2, the gliders and fire were changed to fireballs and water, and the flippers and fire boots were switched. Due to splash delay, the constant drowning of the fireballs would also stop Chip from continuing; to circumvent this, a clone block on top of a real blue wall was placed at (30, 15) to stop the fireballs, as clone blocks can only be pushed in Lynx. The water tile at (21, 3) was also swapped for a fire tile, since the flippers were swapped for fire boots. 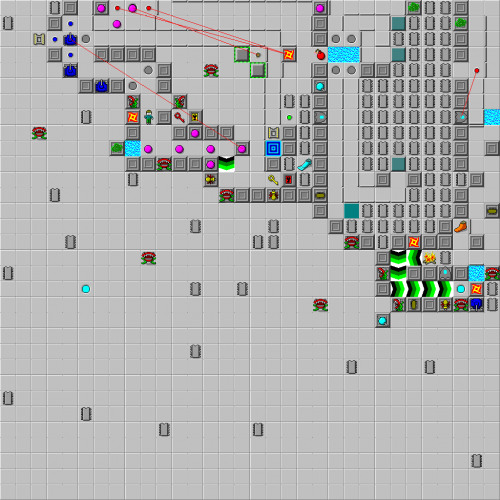