Chiller is the 110th level in Chip's Challenge 1. It is quite a complex level in its unassuming boundaries; Chip must collect items from unpredictable bouncing pink balls, work out a block puzzle, and also move the blocks through a frozen lake on the right. There are seven blocks in the X above, which will be numbered in forwards reading order.

Move block 7 to the corner, as one block must be wasted, and press the green button with block 5, then move block 6 R 3D 2R and pick block 5 back up with a L move. You are now ready to bridge south, but it takes an additional step to get to the block from here, so wait until you arrive U off the block before bridging south. Move block 6 U 4R, then enter the block room from the top and throw block 3 D, block 1 R, block 4 D, and then block 3 4D 6R. Block 6 will now go on the third of five landings which lead to two chips apiece; on this landing, play U from the first chip, then decamp to the landing, collect block 4 and throw it R 4D before bridging to the south area of the level.

Collect both chips in the very southwest, one chip in the room to the east, move through the force floors to pick up a blue key, and then take the other chip. Run 3U RU L [2] up the eastern corridor, take the chips behind the blue lock and wait once again for the ball to bounce itself back in. Now, go through the center of this room and up to the start again, and finish collecting the five landings. You can immediately move block 4 6R and block 3 R; shove block 4 onto landing 1 without following and then circle across the top a second time. Move block 1 2D, block 2 L, block 1 5D 7R, and follow block 3 off landing 5 to two more chips. Proceed with landing 2 by using block 1, collect the unfinished landing 1, and then finally collect the last block from the top side and finish landing 4. Play U from the chip, because R is a bomb. The exit is at the start of the level.

After exiting, the next decade message is now given:
Chip can't wait to join the Bit Busters! The club's already figured out the school's password and accessed everyone's grades! 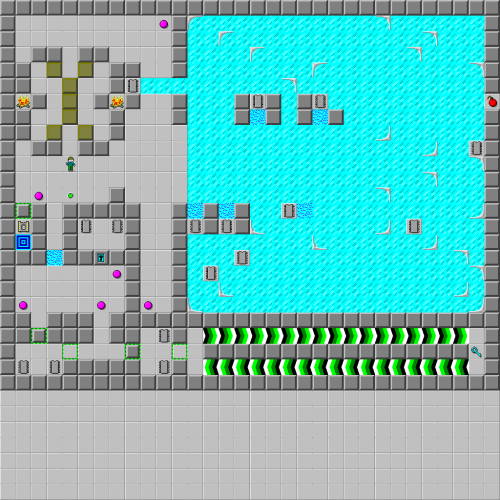