Creative One-Ways is the 86th level in Chip's Challenge Level Pack 2. This level is a one-way puzzle, and eventually with the collection of the green key, turns in the other direction back to the exit.

The pink balls at the beginning forever bar the exit unless a block is sent in front of some of them. The one block that can be used in this way is hot, and also the top edge of that block, even if it were moved R, is blocked off by the green locks. Chip must, then, move through the level to collect the green key, then move back to the start and storm the exit. Even step is highly recommended.

Move the non-hot block L, pass the gliders, tanks, fireballs, another tank, the walker clone machine, and then move to the ball. When the ball bounces back, move off the gravel D 3L D [5] DLDL. Although Chip can simply move D 3L DL, the block still has to be moved L on the way back, which will take up a lot of extra time - an initial [1] for the ball and [4] extra in this room, plus sneaking behind the ball [1] late. A total of [9] can be spared, so the way to gain as many spare moves as possible for the walker clone machine is to use some of them to speed the way out of this room.

One solution is to move D 3L 2D LDL, which moves the block L now, but Chip will still have to lose [5] on the ball, such that only [1] is saved. However, if the ball is left to bounce off the block again, it will be [2] further down the path when Chip arrives in the same location at the same time and [3] is saved. Perfect timing is not necessary, since only [8] is wasted with this method.

After passing this room, continue past clone blocks, west from the thief to another ball, and then move to the bug guarding the green key. Run with the bug and take the key, then open the green lock and wait for the bug to release Chip from the trap. Now, go the other way.

Open the one lock to the left for a blue key, use it to dodge the other ball, then use the green key again to clone another block. Push it DL [1] U 2L U to reach the other ball, then use the yellow key, shove the block L, and slide DRU to sneak past. Take the red key and use the corridor, removing all the dirt but one, to trap the teeth in the very corner, and then move to the walker clone machine. Close the toggle wall as fast as you can, then move along as fast as you can. The deadline for stepping D off the thief is 273.4, which means no more than [6] lost to the walkers.

Follow the path back to the fireball clone machine and take the suction boots. When you hide on the force floors, another time-saving opportunity is usable - move L onto the thief, then [1] R and behind the fireball chain - but this time all [5] saved will have to be lost to gliders, so the route is made harder without increasing the probability of success. If the [1] is overshot or the spring slide is missed, the bootless Chip will have cooked this level.

When Chip passes the force floors, he has two equally timed choices: either collect the ice skates and skate to the blue button, touching it twice, or slide onto the button and use the spring slide to escape just in time. To steal the flippers, get in the bigger gap between the gliders and open this green lock. Now, Chip can take the fire boots, move the hot block R, then slide >[3:RL] through the bottom teleport, and move the block 4D 2L to allow Chip to reach the exit safely.

The buried thin wall at [12, 23] makes Creative One-Ways unplayable in Lynx. Simply replace it with a recessed wall to allow the level to play in Lynx, then make it solvable by making a couple of fast changes. Change the wall at [11, 27] to gravel so that Chip can move R into the trap (as his >U move in MS would make it impossible to turn east) without disturbing the path of the bug.

Secondly, since tanks do not wait [1] before they turn and Chip cannot boost away from [1, 1], the upper tank under the ice rink will either touch the blue button before Chip can get past the tank on [3, 0], or will hit the button at the same time as Chip touches [4, 1], therefore sliding onto the ice rink and blocking Chip off. Move the upper tank R to give it enough room to back up, and the level can now be solved in Lynx. 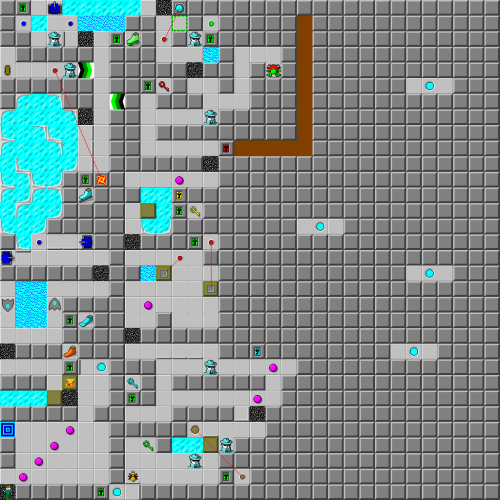