Jump to navigation Jump to search
This article is about the 132nd level of the unfinished prototype of the CC1 port for the NES. For the 46th level in CCLP4, see Exclusive Or.

Exclusive is the 132nd level in Chip's Challenge 1 for the unfinished NES port. It was designed by Chuck Sommerville, and ported to a .DAT for play in Tile World by Eric Schmidt. Exclusive is long, but relatively easy, so long as the player keeps their wits about them. The level was intended to be played under Lynx rules, and when ported to MS it becomes majorly busted, because reaching the skates allows Chip to walk through an ice corner at the start of the level. As a result, the bold time in MS is significantly faster than the bold time in Lynx.

For those who want to win the intended way, here is a more casual-oriented solution. From the start, there are 4 entrances to the teleport, all of which lead to different sections. Enter from the bottom tile to reach the teeth area; sneak past it and head along the bottom of the level to reach a column of 5 blocks in the southwest. Use 2 blocks to turn the top 2 water tiles to floor, then retrieve a third block and use it to detonate the third bomb from the left. Ignore the chip to the northeast, as it won't be required; instead, head northwest to an area with a red button. Tap the button at least four times to clone enough fireballs to get all three yellow keys, and push the block onto the button to get it out of the way.

With the first blue key in hand, collect the fire boots back in the lower block area, then head to the suction boots and red key seen above and use the suction boots to collect the flippers. Note that there is no gravel guarding the flippers, meaning the glider circling here can ambush you if you aren't fast enough. Return to the block section where 2 blocks remain and bring one of these blocks over to the thief section by maneuvering it through the ice section and to the northwest.

From here, use the block to blow up the bomb guarding the green key, but don't step on any thieves. Go back to the block room and take the last block above the starting area to the top right corner of the map into one of two bombs guarding the other blue key. The final required block is in the ice section on the right where Chip found the skates. Take the topmost block out by pushing it down twice and follow the same route as before to blow up the final bomb and collect the second blue key. Chip can now take all the items he picked up and open the path to the exit through the force floor path. 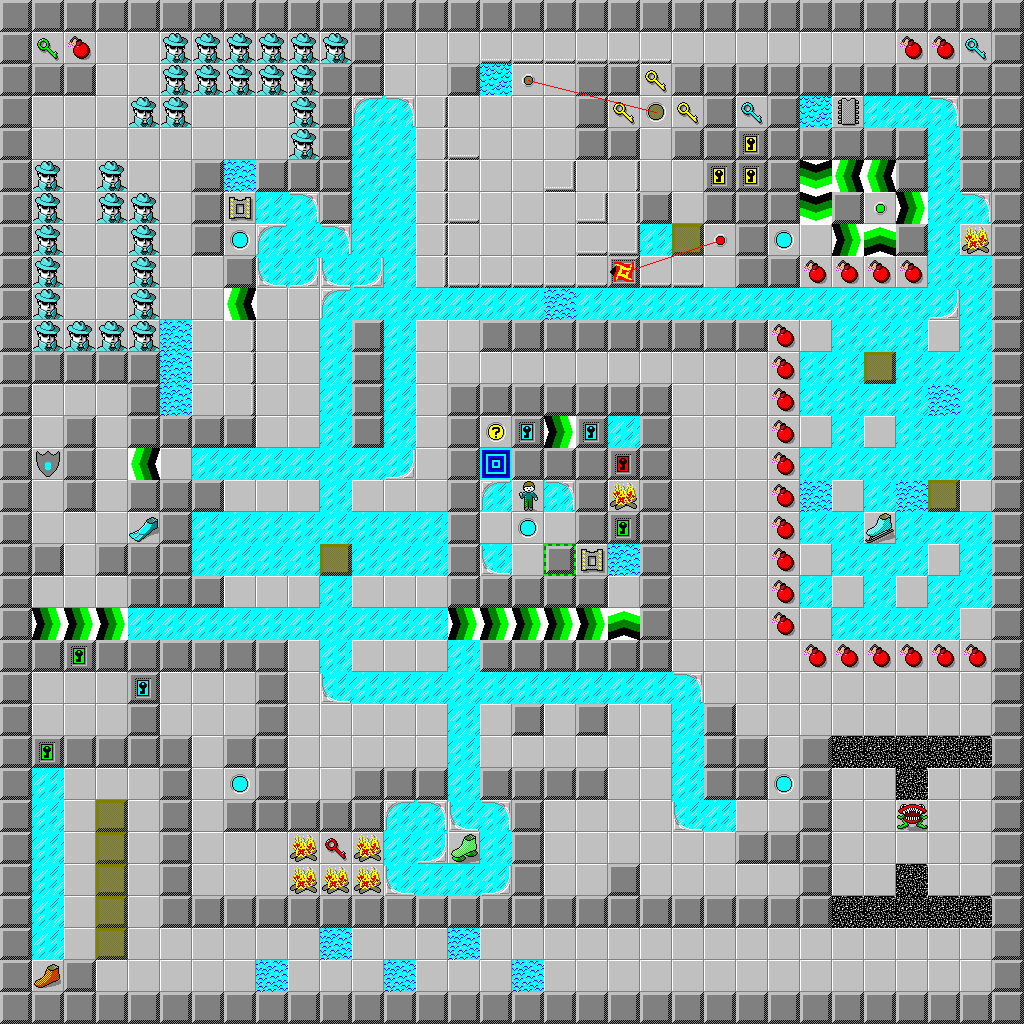